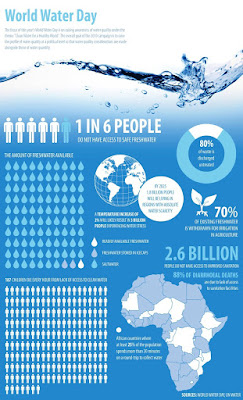 World Water Day is an international observance and an opportunity to learn more about water related issues, be inspired to tell others and take action to make a difference. World Water Day dates back to the 1992 United Nations Conference on Environment and Development where an international observance for water was recommended. The United Nations General Assembly responded by designating 22 March 1993 as the first World Water Day. It has been held annually since then. Each year, UN-Water — the entity that coordinates the UN’s work on water and sanitation — sets a theme for World Water Day corresponding to a current or future challenge. The engagement campaign is coordinated by one or several of the UN-Water Members with a related mandate.

Today, almost half of the world's workers - 1.5 billion people - work in water related sectors and nearly all jobs depend on water and those that ensure its safe delivery. Yet the millions of people who work in water are often not recognized or protected by basic labour rights. The theme in 2016 — water and jobs — is focusing on how enough quantity and quality of water can change workers' lives and livelihoods - and even transform societies and economies.

World Water Day is an annual event celebrated on March 22. The day focuses attention on the importance of freshwater and advocates for the sustainable management of freshwater resources.

This day was first formally proposed in Agenda 21 of the 1992 United Nations Conference on Environment and Development in Rio de Janeiro. In 1993, the first World Water Day was designated by the United Nations General Assembly and since, each year focuses on a different issue.

The UN and its member nations devote this day to implementing UN recommendations and promoting concrete activities within their countries regarding the world's water resources. Additionally, a number of nongovernmental organizations promoting clean water and sustainable aquatic habitats have used World Water Day as a time to focus attention on the critical issues of our era. Events such as theatrical and musical celebrations, educational events, and campaigns to raise money for access to clean and affordable water are held worldwide on World Water Day, or on convenient dates close to March 22.

Each year World Water Day is celebrated to show the importance of water on the globe, and each year there is an annual theme.

2016: Water and Jobs ("Better water, better jobs") - This theme shows the correlations between water and jobs created either directly or indirectly by water sources on the globe.

Participants will get an opportunity to learn more about the theme of World Water Day, get the latest update on how the international community perceives water's role in the post-2015 framework and will be invited to get involved in the campaign. In addition, participants will also discover the logo of the World Water Day 2015.