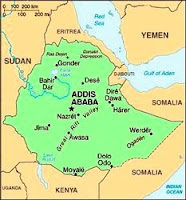 Hundreds of stakeholders from across the continent gathered here recently for the Seventh African Development Forum, or ADF VII, to discuss the forum’s theme, ‘Acting on Climate Change for Sustainable Development in Africa.’

Although Africa contributes less than 4 per cent of global greenhouse gas emissions, it remains highly vulnerable to the impacts of climate change. The poorest and most excluded segments of society are arguably those with the lowest capacity to respond to those impacts – which exacerbate inequalities in health and education, and in access to adequate food, safe water and other resources.

ADF VII participants agreed that the global debate on this issue therefore needs to be widened; it must include the vulnerable and marginalized groups that bear the greatest brunt of climate change.

The forum included governments, civil society organizations and private-sector institutions invited by the African Development Bank, the UN Economic Commission for Africa (ECA) and the African Union Commission (AUC). Held in mid-October, it explored linkages between climate change and sub-themes such as agriculture, energy, trade and industry, gender, finance, human and social development, science, technology and innovation, security and diplomacy.

Representatives of UN agencies, the African Union and the UN Economic Commission for Africa hold a press conference during ADF VII in Ethiopia to elaborate on their individual and collective role in addressing climate change.
“This forum provides us with a singular opportunity to strengthen the African common position in international climate change negotiations,” said ECA Executive Secretary Abdoulie Janneh, “by raising awareness and building consensus among all African stakeholders on Africa’s concerns and expectations for a post-2012 global climate-change agreement.”

AUC Chairperson Jean Ping added: “We need to adopt a common African position and speak with one voice.”

This common position and consensus, Mr. Janneh of ECA reiterated, can help address the projected impacts of climate change on Africa’s development and economic growth. In turn, he suggested, the UN Millennium Development Goals and sustainable development in Africa will have a greater chance of being realized.

A youth panel discussion is held before ADF VII, organized under the auspices of the UN-African Union Social and Human Development Cluster.
To that end, ADF VII delegates agreed to strengthen the capacity of the Conference of African Heads of State and Government on Climate Change. This is expected to help mobilize political commitment and provide political leadership in regional and international climate-change processes by providing reliable and timely information and policy advice.

There was also a strong sense that action taken on climate change must involve children and young people – including those from marginalized groups – as well as women and men in equal measure. Compared to adults, children are more susceptible to the adverse effects of environmental degradation; their ongoing physiological and cognitive development makes them especially sensitive to adverse environmental conditions like poor air quality, contaminated water, malnutrition and extreme heat.

To effectively adapt to climatic changes, therefore, the most vulnerable children and communities must be adequately protected. During the forum, UNICEF advocated for a child- and gender-centred approach to climate mitigation and adaptation at the community level.

In addition, UNICEF supported the participation of Africa-based youth representatives in the forum – including Esther Agbarakwe from Nigeria, Winnie Asiti from Kenya and Ezilon Kasoka from Malawi – along with Kerry Constabile, Specialist on the Environment and Young People. Esther had a rare opportunity to present a statement on behalf of African youth during the ADF VII opening session.

“More than anyone else, we, the youth, face unprecedented challenges as a result of global climate change. We also share the responsibility of addressing it,” she said.

The forum concluded with a consensus statement on key climate-change issues that are vital to Africa. Based on the evidence and impact of climate change, delegates agreed that large emitting countries should make deep cuts in emissions – and that the international community should support Africa’s effort to promote broad-based, equitable, resource-efficient and environmentally sustainable growth.