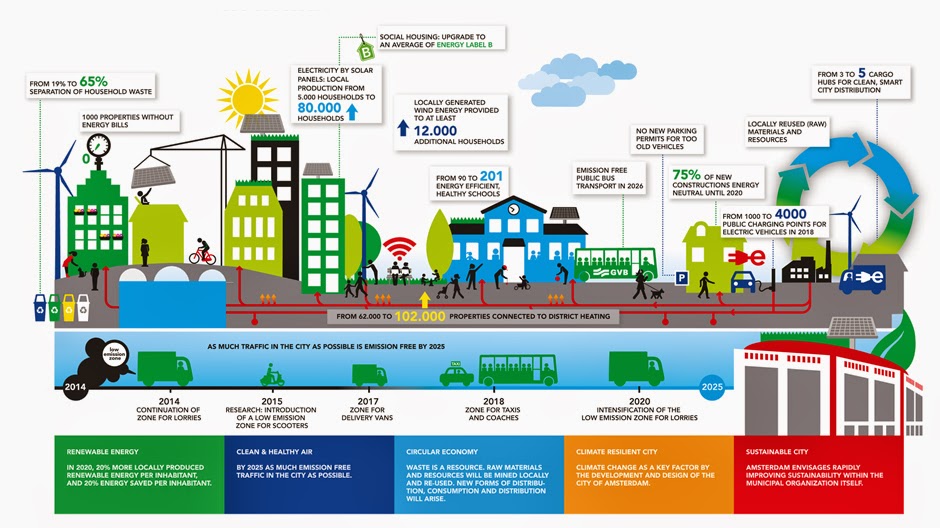 The Amsterdam College of Mayor and Alderpersons has outlined new plans to increase the pace of improving sustainability in the Dutch capital. As part of the new motion, the number of households using locally-generated sustainable electricity needs to have increased by at least 92,000 by 2020.
Concrete plans have been drawn up for energy saving efforts and accelerating the process of connecting existing houses to district heating systems. The construction market will be challenged to build greener properties. Air quality in the city will be improved through continued efforts to encourage the use of electric transport, by stimulating smart distribution processes and extending low emission zones to include more types of vehicles. During the current council term, work will be conducted at 111 schools to make them greener and healthier places to work. These measures are outlined in the Sustainability Agenda (Agenda Duurzaamheid), agreed upon by the College earlier this week.

Amsterdam embraces the notion of a circular economy and is keen to become an attractive location for innovative companies to set up shop: businesses with production processes that only produce useful raw materials instead of waste. In implementing the plans, the College will focus primarily on initiatives and projects that can be quickly rolled out on a larger scale. Alderperson for Sustainability Abdeluheb Choho: “Amsterdam is constantly growing and as such, we need to ensure that the city becomes stronger, healthier and more liveable. We’re looking to take the lead from Amsterdammers, organisations and businesses that are already demonstrating that sustainability has both financial and social benefits.” The College also envisages rapidly improving sustainability within the municipal organisation itself.

Nowadays, solar panels and wind turbines represent attractive investments for homeowners and businesses. The College plans to make it easier to install solar panels as part of the drive to ensure that electricity generated by solar panels provides power for another 80,000 households by 2020 (it currently provides electricity to 5,000 households). Wind turbines installed at locations including Amsterdam’s port areas are to provide at least another 12,000 additional households with energy by 2020. In order to ensure that living in Amsterdam remains affordable and in light of depleting gas reserves, the College is keen to accelerate connecting more houses to district heating (the primary focus being on existing homes). The College wants to increase the number of houses and businesses connected to such systems from the current total of 62,000 to 102,000 by 2020. By 2040, the envisaged number of connections is 230,000.

Older houses waste a significant amount of energy. With this in mind, the College plans to invest in a project that will see corporations make improvements to 1,000 older homes in order to eliminate energy bills at these properties. The project is set to provide impetus for similar projects by showing that such investment can be beneficial to residents, property owners and financiers. When it comes to new housing developments, the City of Amsterdam is keen to challenge developers to construct greener buildings than are currently required by law. As such, greater importance will be attached to sustainability during land tenders.

Amsterdam is dedicated to remaining a frontrunner in electric transport and strives to ensure that as much traffic in the city as possible is emission free by 2025. Measures envisaged by the College include increasing the number of electric charging points from 1,000 to 4,000 and developing two new cargo hubs (goods transfer facilities) on the outskirts of the city.

In order to further reduce carbon and nitrogen dioxide emissions, as of 1 January 2017, the current low-emission zones for lorries will be extended to include delivery vans built before 2000. As of 1 January 2018, the zone will also apply to taxis and coaches. Buses operated by the GVB (the company responsible for public transport in Amsterdam) will be emission free by 2026 at the latest. The College also plans to investigate the possibility of low-emission zones for scooters that discharge harmful emissions.

The consideration of carbon is a new aspect of city policy, as the College moves from focusing on the established norms to more closely considering the health of Amsterdammers. Norms are yet to be established for carbon, but it has been proved to be harmful to health.

Alderperson Choho: “Amsterdam has a lot to be proud of. Our city is home to a huge amount of thinkers, doers, technical wizards, inventors, entrepreneurs and ‘everyday’ citizens who commit time and effort to making the city greener. I look forward to collaborating with these people as we work towards a circular economy in Amsterdam.”