Solutions for a cultivated planet 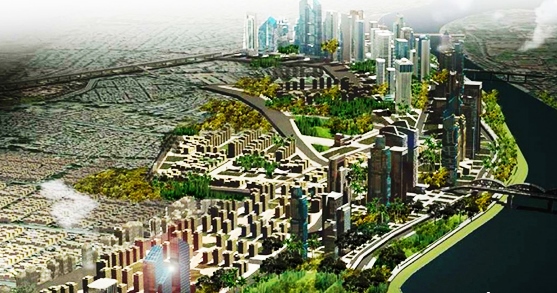 Increasing population and consumption are placing unprecedented demands on agriculture and natural resources. Today, approximately a billion people are chronically malnourished while our agricultural systems are concurrently degrading land, water, biodiversity and climate on a global scale.

To meet the world's future food security and sustainability needs, food production must grow substantially while, at the same time, agriculture's environmental footprint must shrink dramatically. Here we analyse solutions to this dilemma, showing that tremendous progress could be made by halting agricultural expansion, closing 'yield gaps' on underperforming lands, increasing cropping efficiency, shifting diets and reducing waste. Together, these strategies could double food production while greatly reducing the environmental impacts of agriculture.

Can we feed the 9-billion-plus people anticipated to live on this planet in 2050 without destroying Earth’s life support systems? A team of researchers from the U.S., Canada, Sweden and Germany concluded we can—if we successfully pursue sustainable food production on five key fronts: halting farmland expansion in the tropics, closing yield gaps on underperforming lands, using agricultural inputs more strategically, shifting diets and reducing food waste.

“For the first time, we have shown that it is possible to both feed a hungry world and protect a threatened planet,” said lead author Jonathan Foley, head of the University of Minnesota’s Institute on the Environment. “It will take serious work. But we can do it.”

The research was a response to what Foley calls “a daunting triple threat.”

“First, a billion people currently lack adequate access to food, not only creating hunger but also setting the stage for worldwide instability. Second, agriculture, the single-most important thing we do to benefit humanity, is also is the single biggest threat to the global environment—including the land, water and climate that make Earth habitable. Third, with 2 to 3 billion more people expected in coming decades, and increasing consumption of meat and biofuels, food demand will be far greater in 2050 than it is today,” Foley said. “Given that we’re not even able to meet current needs sustainably, how will we feed the anticipated 9-billion-plus of us without destroying the planet?”

The international team of researchers began by characterizing agriculture today. Using new satellite and ground-based observations, the team documented changes in agricultural lands and their yields over the past 40 years. Currently, farm and ranch lands cover nearly 40 percent of Earth’s land area—the largest use of land on the planet. Though modern agriculture has boosted crops yields, increases between 1985 and 2005 were less than half what is commonly reported and are slowing. And because one-third of crops are used for livestock feed, biofuels and other nonfood products, the number of hunger-abating calories produced per cultivated acre is far lower than it could be—even (perhaps particularly) in fields with high-yielding, but animal-feeding, crops.

All that comes with a hefty environmental price tag. Humans have already cleared 70 percent of all grasslands, half of all savannas, 45 percent of temperate deciduous forests and 27 percent of tropical forests. In addition, intensification of agriculture—changes in irrigation, fertilizer use and other practices aimed at boosting per-acre yield—has increased water pollution, local water shortages and energy use. Strikingly, agricultural activities such as clearing land, growing rice, raising cattle and overusing fertilizers make up the single largest contributor of greenhouse gases to the atmosphere, accounting for roughly 35 percent of the total.

Based on data they gathered about crop production and environmental impacts using satellite maps and on-the-ground records, the researchers proposed a five-point plan for feeding the world while protecting the planet:

Reduced land clearing for agriculture, particularly in the tropical rainforests, achieved using incentives such as payment for ecosystem services, certification and ecotourism, can yield huge environmental benefits without dramatically cutting into agricultural production or economic well-being.

Many parts of Africa, Latin America and Eastern Europe have substantial “yield gaps”—places where farmland is not living up to its potential for producing crops. Closing these gaps through improved use of existing crop varieties, better management and improved genetics could increase current food production nearly 60 percent.

Current use of water, nutrients and ag chemicals suffers from what the research team calls “Goldilocks’ Problem”: too much in some places, too little in others, rarely just right. Strategic reallocation could substantially boost the benefit we get from precious inputs.

One-third of the food farms produce ends up discarded, spoiled or eaten by pests. Eliminating waste in the path food takes from farm to mouth could boost food available for consumption another 50 percent.

“Lots of other scholars and thinkers have proposed solutions to global food and environmental problems. But they were often fragmented, only looking at one aspect of the problem at one time. And they often lacked the specifics and numbers to back them up; one always wondered whether these proposed solutions were enough to solve the problem,” said Navin Ramankutty, associate professor of geography at McGill University and one of the team’s leaders.

“What’s new and exciting here is that we considered solutions to both feeding our growing world andsolving the global environmental crisis of agriculture at the same time,” Foley said. “We focused the world’s best scientific data and models this problem, to demonstrate that these solutions could actually work—showing where, when and how they could be most effective. No one has done this before.”

To move from today’s insufficient food system to one that can and does feed us all, without compromising the environment, the research team also recommends:
1.Focus on improving agricultural systems where major improvements in food production or environmental protection come with the least expense and effort.
2.Pursue approaches that are resilient—that can adapt to the unexpected circumstances that undoubtedly will arise along the way.
3.Develop better tools for evaluating costs and benefits of alternatives, so the choices we make clearly move us toward better food security and environmental sustainability.
4.Favor the outcome, not the approach. Take the best of conventional agriculture, organic agriculture, industrial farming, small local production, biotechnology and more to create a sustainably intensified global food system.

Foley says, “Providing food and nutrition for 9 billion people without compromising the global environment will be one of the greatest challenges our civilization has ever faced. It will require the imagination, determination and hard work of countless people from all over the world, embarked on one of the most important causes in history. So let’s work together to make it happen. There is no time to lose.”