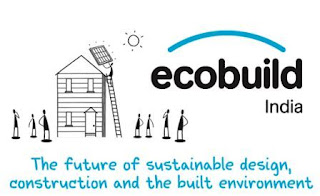 Ecobuild India 2013 - an international sustainability conference and exhibition programme at the Bombay Exhibition Centre from April 16-18, 2013,

Ecobuild India 2013 is an event for sustainable design and construction in the built environment. It will bring together a wealth of top sustainability experts to debate and share their unique perspective on the agenda for India's sustainable future and the hot issues in the built environment.
Designed to inspire, educate and inform, the three-day dual track conference programme will feature key industry speakers, government officials, academics in debates and high-level discussions to cover topics such as Tackling climate change - what's the best strategy for India?; The key challenges before the government in balancing environment and development? Resolving the water conundrum; Collaboration in the area of energy poverty, Protecting our rich biodiversity among other issues.

Track two of the conference will cover topics such as Embracing India's heritage in sustainable planning and design; Improving urban planning and design; The future of house building: Green construction and design; Sustainable infrastructure in the context of tall buildings; The future of design and the role of architects: Taking the lead in creating an energy efficient property sector; Investment in Urban Regeneration and Smart Infrastructure among other topics.

The Ecobuild brand is the most effective marketing platform for suppliers of sustainable and innovative construction products and services, attended by the most influential individuals and organisations in design and construction

Ecobuild has seen meteoric growth since its launch in the UK, in 2004. From a humble 6,100 visitors in 2006, Ecobuild delivered 57,956 leading professionals and 1.549 exhibiting companies in its ninth edition. 2012 also saw Ecobuild branch out into international territories for the first time – Ecobuild China 2012 welcomed 15,383 attendees and 127 companies and will return in 2013. With a launch event in India in April 2013 to add to its bow, 2013 will propel Ecobuild as the global hub for the sustainable building community.


The current economic landscape and the momentum towards sustainable building makes this the ideal time to launch Ecobuild India. The country has seen unprecedented growth in the last few decades. With a burgeoning population, steered by greater social mobility and a significant growth in urban living, the country is struggling to meet the growing demand for critical resources and rising energy costs.

With the economy predicted to grow 7.3% in 2013 compared to global growth of 3.9%*, sustainable building and lowering India's carbon emissions is essential for containing demand without jeopardising the country’s growth.

Improving the country's infrastructure is the Indian Government's top priority. In it’s 11th 5-year plan (2007-12) it invested $500 billion and India's Planning Commission has set out detailed plans to spend a further $1 trillion up to 2017. India is second only to China in the number of Private Public Partnerships (PPP) project. The Planning Commission aims to develop this as a means of financing infrastructure projects as well as in social sectors such as healthcare and education. While developing countries are facing a mammoth retrofitting challenge to reduce the carbon emissions of their built environment, India has the potential to get it right the first time.