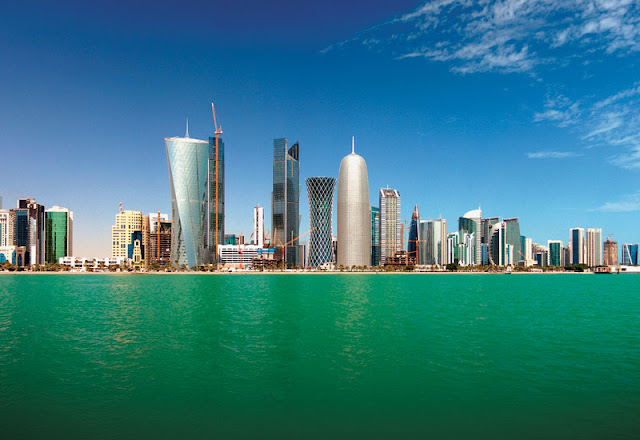 As for the innovative Ras Abu Aboud stadium, which is constructed from shipping containers, it will be completely dismantled after the 2022 World Cup - it is the first stadium in World Cup history which has been specifically designed for temporary use and repurposing. Parts of the stadium will be used in sporting and non-sporting projects after the tournament setting new standards in sustainability with a waterfront development taking its place.

In all of the stadia at 2022 World Cup Qatar, low energy lighting will be used to reduce comsumption to a third of the energy required for standard lighting.

Transport is another area which has been addressed with Doha Metro, the three-line rail system which will transport fans to the World Cup venues, provides a fast and environmental-friendly service.

In accordance with the Qatar National Vision 2030 project, the majority of the infrastructure and new transport network which the 2022 World Cup will benefit from, forms part of a long-term initiave which was launched before Qatar was announced as the host nation for the 2022 World Cup.

Ensure availability and sustainable management of water and sanitation for all
The State of Qatar ensures the provision of water for all its population. The percentage of population that benefited from safe drinking water services reached 100%, where seawater desalination constitutes 60% of total available water. Sustainably-managed sanitation services are also provided for all and the percentage of safely treated wastewater reached100% as well.

The total loss of desalinated water was reduced to 10% in 2016 (of which 4.7% was due to real loss and less than 6% was due to administrative loss), compared to 30% in 2011. The Rationalization Law No. 26 of 2008 was amended by Law No. 20/2015 to raise users’ awareness on the optimal use of water. In addition, defective meters have been replaced with smart meters. Modern techniques to rationalize the use of water have been installed in some schools and mosques and are being installed for other uses. Wastewater treatment plants have been expanded and the study of the establishment of an industrial wastewater treatment plant has been completed. Qatar’s water policy has also been prepared and approved, which includes an integrated management of water resources to be implemented in 2018, while Qatar Water Strategy is underway and will be completed by mid-2018.

Ensure access to affordable, reliable, sustainable and modern energy for all
The State of Qatar has ensured that its population has access to affordable, reliable and sustainable energy services by following an optimal pricing method of energy sector-related goods (water, electricity, fuel). The State has adopted alternative sources of energy, such as: the establishment of Umm AlHoul projects, Siraj Energy Company and a number of solar-related industrial companies, e.g. Qatar Solar Technologies.

Qatar has also promoted energy and gas efficiency through the formation of a National Renewable Energy Committee at the Ministry of Energy and Industry, which is drafting a national policy for the development of the new and renewable energy sector.

Within the framework of enhancing the efficiency of energy production, distribution and consumption, the State of Qatar has undertaken the following measures:

Qatar District Cooling Company “Qatar Cool” has achieved compliance with the transition plan for the use of treated wastewater in the operation of cooling stations instead of using potable water (in the Pearl and West Bay stations).

The necessary studies are conducted by Qatar Electricity and Water Company (KAHRAMAA) for the rehabilitation and development of Ras Abu Fantas area by replacing the old plants by new ones with better efficiency, state-of-the-art technologies and low emissions by 2018.

Make cities and human settlements inclusive, safe, resilient and sustainable
The State of Qatar has ensured that the overall urban plan is the spatial translation of QNV 2030 and a strategic guide to the management and development of vibrant and sustainable spatial communities, such as cities and human settlements, in order to improve the quality of life, provide a decent living for both citizens and expatriates and make Qatar a safe haven for learning and innovation. Qatar has also built an advanced infrastructure, enabled citizens to obtain modern housing, constructed universities, research centers, schools, public libraries, museums, heritage villages and clubs, and established hospitals, health centers, playgrounds, parks, green areas and rehabilitation centers for people with disabilities. It has further provided clean water and electricity at affordable cost, in addition to transport, telephone and Internet networks. Doha has become an attractive destination for shopping and recreation at reasonable cost. Doha has a world class convention center, a GISbased referencing system for zones, streets and buildings, which is used effectively in postal, ambulance, emergency and other service; and a public library with international standards. An international airport has been built to match the world’s most advenced airports, as well as an international seaport that contributes to the promotion of international trade. Despite the large population increase, the death toll from road accidents has been decreased, and all phases of the National Disaster Management and Recovery Project have been completed in 2016.

The first phase of Qatar Rail will be inaugurated in 2019, and Qatar will host the FIFA World Cup in 2022; a unique global sport and cultural event that will be broadcast all over the world. The elected Central Municipal Council works to improve the quality of services provided by municipalities. The State is working hard to combat pollution and greenhouse gas emissions to manage the effects of climate change and to implement the recommendations of the United Nations Framework Convention on Climate Change. Qatar, in accordance with QNV 2030, aspires to optimize investment in natural resources to meet the needs of the current generation without prejudice to the rights of future generations, and to build more smart cities, such as the Pearl and Lusail cities.

Ensure sustainable consumption and production patterns
The State of Qatar has been able to create a clean and sustainable environment despite the increase in its population. Qatar encourages the efficient use of natural resources and green initiatives, recycling and reducing the production of waste, and implementing programs and projects related to pollution and solid waste recycling. The Domestic Solid Waste Management Center was opened in Mesaieed in 2011. Solid waste (construction) generation was reduced from about 9.6 million tons in 2011 to 4.6 million tons in 2016. Qatar has also encouraged and promoted local product culture.

The Government of Qatar has encouraged the engagement of consumers by raising awareness and education on optimal water use patterns, rationalizing energy use by switching to energy-efficient lamps and air conditioners, encouraging the use of renewable energy, increasing the efficiency of water desalination systems and reducing gas emissions. It has also directed to avoid the excessive use of groundwater through smart meters so as not to aggravate water stress and salinity. It has further supported the installation of modern techniques to rationalize the use of water in schools and mosques, and encouraged the use of treated wastewater in central cooling facilities and in irrigation of fodder and green spaces.

The government has also promoted the efficient use of energy and gas through the National Committee on Renewable Energy, in addition to providing a system of plant, fish, and livestock production that contributes to food security to reach high rates of self-sufficiency.

Protect, restore and promote sustainable use of terrestrial ecosystems, sustainably manage forests, combat desertification, and halt and reverse land degradation and halt biodiversity loss
The State of Qatar has endeavored to preserve its biodiversity as part of its heritage, culture and future in order to preserve its national and cultural identity, food security and local development: and to provide resources for scientific and medical research, as well as other benefits. Over the past ten years, the terrestrial protected areas increased from 11% to 23.6% totaling 2,744 km2 , in addition to 6.2% for marine protected areas totaling 720 km2 , bringing the total protected area to 3,464 km2 , representing 29.8% of Qatar’s total area, which is one of the highest rates in the world. These protected areas, mostly terrestrial, aim to protect sensitive desert ecosystems from overhunting and overgrazing, as well as to combat desertification and halt land degradation. The Government is also working to raise awareness on the current and future status of biodiversity and to establish and operate a biodiversity database by the end of 2022.

Strengthen the means of implementation and revitalize the global partnership for sustainable development
The State of Qatar has strengthened its global presence by hosting several international conferences on sustainable development, such as the “Follow-up International Conference on Financing for Development To Review The Implementation of the Monterrey Consensus” held in Doha (29 November - 2 December 2008). In terms of financing for development, the State of Qatar provided development assistance to poor countries, needy groups and refugees in excess of US $ 2 billion in 2017. The role of civil society in the country became more active and sponsored the “Doha Declaration on the Role of Civil Society in the Implementation of the 2030 Agenda for Sustainable Development”, 2017. The State of Qatar was keen to promote the use of technology in the implementation of most of its economic, social and environmental development programs aimed at improving the quality of life in the state and establishing of sustainable societies where no one is left behind. The Qatar National Research Strategy 2012 provides a framework for the research objectives of Qatar Foundation Research & Development Sector. Qatar has also been keen to enhance the capacity of its citizens to enable them to effectively contribute to the development process. Thus, Qatar has established schools and universities and sent many students on scholarships abroad. Moreover, The State of Qatar has signed trade agreements with many countries around the world.