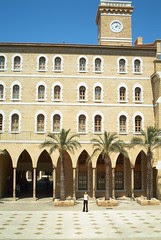 Image by deutsch_laender via Flickr
The Environmental and Sustainable Development Unit (ESDU) at the American University of Beirut has received a $246,000 Canadian grant for the promotion of rural development in the Arab region.

Provided by the Canadian International Development Research Center, the grant will allow ESDU to continue its activities of outcome mapping, mainstream evaluation theory and practice, and to support the development demand and supply side of development by capacity building and producing Arabic material.

"The funds are to be channeled into two major components of the program," explained Hamadeh. "The first includes institutional capacity building, with numerous trainings, translating the basic references into Arabic and adapting the whole concept of development for the region. The second concerns itself with the establishment of a specified body to create pilot activities and concretely apply our project on the ground."

"We play a leading role in the region in introducing new concepts in development, Arabizing them so-to-speak, and streamlining them for the region," said Hamadeh. "It takes a certain time for the people on the ground to accept the new methods, and that is why we are favoring a participatory approach. By working with municipalities, local governments, NGOs and farmers' cooperatives, we are empowering the locals' capacity building to implement the various projects."

ESDU is an interdisciplinary research and development unit specialized in sustainable rural livelihoods. It was established in 2001 at the Faculty of Agricultural and Food Sciences at AUB to promote collaboration on sustainable development initiatives among departments at AUB and a wide variety of other institutions and organizations undertaking related activities.

AUB faculty members created the ESDU and is a textbook example of bottom-up approach," explained Hamadeh. "We started and still are working on a project-to-project basis, without the benefit of strong institutional support... We have been functioning on minimal financial support so far. But the new grant is set to change all that."

According to Hamadeh, in the beginning they concentrated on community-based rural livelihood and were pioneers in introducing organic produce—the AUB "healthy basket" being a well-known outcome. The emphasis was on revival of agriculture on the community level and promoting collaboration on sustainable development initiatives among departments at AUB and a wide variety of other institutions and organizations undertaking related activities in Lebanon and the region.

The ESDU has implemented a number of large-scale services and development research contracts in Lebanon and the MENA region and is involved in the creation of public-private partnerships in order to enhance the operation of community-based enterprises. The project values so far exceed $5 million.

Moreover, an agreement has been signed with the Food and Agriculture Organization for the year 2011 to build on the Communication for Development initiative in the Near East launched in 2007 with the establishment of a regional portal comdev-neareast.org ; and funding was secured for the publication of two issues of the Urban Agriculture Magazine initiated in 2006 and published in both hard and soft copies urbanagriculture-mena.org.

"We have become the seventh regional center on urban agriculture, overseeing Lebanon, Syria, Jordan, Egypt, Morocco, Tunisia and Yemen," said Hamadeh. "It is our goal to introduce and implement new ideas for an improved rural food supply and better future."

The faculty is also in the process of approving a master's program in rural community development, which is expected to be fully launched by the 2011-12 academic year