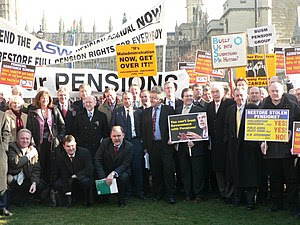 Image via Wikipedia
Europe needs to cut its pension deficits or risk prolonging the region’s debt crisis as investors punish governments that don’t force citizens to work longer, said Finnish Finance Minister Jyrki Katainen.
Failures to address pension deficits “have come to the forefront with a completely different degree of gravity,” Katainen said in an interview. Investors “don’t just look at the budget deficit or debt, but the structural weaknesses,” he said. Finland, home to Europe’s fastest-aging population, is a “test lab” for gauging how pension shortfalls will affect government finances and debt markets, he said.
Europe spends almost four times as much on its retirees as China, measured as a proportion of gross domestic product, and one and a half times as much as the U.S., according to Standard & Poor’s. Europe’s “unsustainable” retirement spending will ultimately hurt its creditworthiness, the rating company says.
“Time is running out,” said S&P’s Madrid-based analyst Marko Mrsnik in an interview. Europe’s “current systems, the way they are designed and given the underlying demographic profiles, are unsustainable in several countries.”

That hasn’t stopped some Europeans taking to the streets to protest government efforts to adjust pension laws to track increased longevity. France has been crippled by five national strikes as citizens balk at a bill requiring them to work an extra two years until the age of 62.
Air France-KLM Group labor unions today called on members to stage a day of protests and strikes on Nov. 4 against the French government’s pension system overhaul. Katainen says Europe’s current pension model is unaffordable.
‘Hot Topic’
In Finland, “if demand for health-care services grows as much as we’ve calculated, all our young people should go work for the public sector to provide health-care services, and that’s just not possible,” Katainen said in the Oct. 20 interview.
According to Aarre Sahramaa, who helps manage 2.5 billion euros ($3.5 billion) in fixed-income assets at Etera Mutual Pension Insurance Company in Helsinki, “pension deficits haven’t yet been completely factored into” European sovereign bond prices. “But the topic will get hotter in coming years.”
French 30-year government bonds have slipped about 7 percent since an Aug. 26 peak, while Italian debt of the same maturity has lost about 3 percent, according to data available on Bloomberg. German 30-year benchmark bonds are down about 4 percent since their August peak.
Southern Europe
“I think the big southern European countries, such as Italy, aren’t in a very good situation,” Sahramaa said. “The impact should probably show in bonds with longer maturities.”
Yields, which move inversely to bond prices, rose today in Italy, Spain, Greece and Portugal on 30-year bonds.
In 20 years, half the population in Western Europe will be over 50, according to Professor Sarah Harper, Director of the Oxford Institute of Ageing. That means by 2025, there’ll be one less worker to cover the cost of each pensioner than the four needed today, according to population projections by Eurostat, the European Union’s statistics agency. In Finland, the ratio will shrink to three in five years.
“There has been such an air of unreality about pensions for so long that people simply seem not to realize how expensive they are,” said Ros Altmann, a former adviser to the U.K. government and now a consultant in London. “The mathematics simply don’t work; there is a need for a social revolution.”
Risk Premia
Europe must solve the pension problem, because “it impacts the price of government debt in coming years,” Katainen said. “Countries with an unhealthy pension system are likely to have higher risk premia on debt than the countries where pension systems are sustainable.”
Age-related spending in Europe accounts for 16.3 percent of the region’s gross domestic product, compared with an average of 14.2 percent for the 49 countries included in an S&P survey published Oct. 7. The equivalent ratio for Brazil, Russia, India and China, the so-called BRICs, was 8.7 percent. Age-related spending through 2050 will grow faster in Europe, as a portion of GDP, than in the U.S. and the BRICs, S&P estimates.
Under-funded pensions are getting more attention after Europe’s debt crisis exposed the region’s fiscal shortcomings. Pension assets took a hit in 2008 as the financial crisis slashed asset values. The losses haven’t been fully recouped, Fitch Ratings Inc. said on Sept. 9, citing the Organization for Economic Cooperation and Development.
Fewer Taxpayers
“If there are fewer taxpayers trying to support ever increasing numbers of pensioners, then the economy cannot thrive,” Altmann said. “Surely common sense would dictate that people cannot expect to retire at 60 or 62, live for another 30 years or so and have someone else pay them a huge amount of money without them contributing to the economy.”
Greece will have to spend 12.4 percent more on pensions by 2060 and Spain 6.7 percent more, the European Commission said in its 2009 Ageing Report. By contrast, Germany will have to spend 2.3 percent more and France 1 percent thanks to measures already taken, the commission said.
Finland has taken steps to address growing retirement spending with an automatic reduction in pensions as longevity increases. A person born in 1948 gets a pension of 1,000 euros per month, while future retirees born in 1990 will get 790 euros. The cuts can be offset by working longer.
This isn’t enough and Finland should raise its minimum retirement age to 65 from 63, the OECD said in April. Former Prime Minister Matti Vanhanen tried pushing through the change in 2009 and was forced to back down following public protests.
“The problem is that there is little incentive for politicians to sort pensions out,” said Altmann. “It’s always easiest to pretend to sort the situation out, while not actually doing so and leaving it for future politicians to find out that there isn’t enough money to meet past promises.”