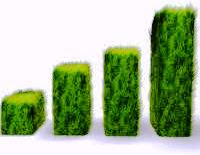 The HDI rankings are designed to show how well various government policies are working, as well as how a society , as a whole, is fairing by its people.
As one might expect, Western democracies — including the U.S. — rank amongst the highest (U.S. is typically ranked in the top five in various categories; Germany is ranked typically in the top 3 spots for various metrics). High income levels are strongly correlated with energy consumption.
But that’s all according to the old HDI. Now comes a new index — the Human Sustainable Development Index (HSDI) — that virtually overturns the current HDI rankings, and just might given less “advanced” nations some encouragement to maintain their sustainable growth.
The new index differs from the old HDI by integrating one additional metric: per capita carbon emissions.
A New Index from an Up and Coming Economy
The new sustainability index is being put forward by a developing nation ecologist named Chuluun Togtokh of the National University of Mongolia, writing in a Nov. 16 Nature essay. In the essay, Togtokh states: “My country is likely to become one of the fastest growing economies in the world, but the current HDI offers no encouragement for it to grow sustainably.”
Indeed, said encouragement will be key to keeping carbon emissions from developing nations low in the coming decades. This will be especially challenging given the tendency for populations whose economies are growing to increase their standard of living, and often their energy usage. But these two factors – am emerging/growing economy and increased energy consumption — need not be strong correlates, as the HSDI shows for nations states like Singapore and Norway.
Togtokh continues: “And in general, the faster a country’s HDI improves, the faster its carbon dioxide emissions increase. The bottom line is that progress in the HDI has come at the cost of global warming.”
But he also notes that this is not a fixed relationship; many nations have improved their HDI rankings (such as in health and education scores) and maintained environmental sustainability.
So, how do the new HSDI rankings compare to the old HDI?
Former top ten HDI members (like the US, Australia, and Canada) drop completely out of that group, and many high-HDI-ranking Middle Eastern countries (United Arab Emirates, Brunei, Qatar and Bahrai) drop lower as well.

Scandinavian countries maintain fairly high rankings, though, with Norway preserving its top ranking on both indexes, with Germany and Japan both slipping one ranking spot. Small nation states like Singapore, Andora, Slovenia and the Czech Republic move up ahead of Australia and the U.S.
As Togtokh notes: “Cultures that value moderation do well in this sustainability index.”
Interestingly, Ireland also maintains a seventh place ranking on both indexes, while Greece (which is not even in the top 28 of HDI nations) ranks at 23, also ahead of the U.S. (so perhaps, by this measure, these societies/economies are in better, long-term shape than current news from the EU conveys).
Togtokh does not see the HSDI as replacing the UN’s HDI, but rather, as building upon it.
“The HDI has shifted the target of development beyond the almighty dollar; the proposed HSDI would go one step further, and change the role models for development.”
How much this new index will prompt high-carbon-footprint nations, like the U.S. and Australia, to change their ways, is debatable. But the new HSDI might just provide some “social incentive” for emerging economies to not imitate the Western model of growth (at least in terms of our profligate, non-renewable energy consumption).
Togtokh notes that his country’s capital (Ulaanbaatar) is already one of the most polluted cities in Asia and that its forests are depleted. He asserts that his country (Mongolia) is at an environmental, economic and cultural “turning point” and desperately needs investments in green technologies.
In a last admonishment, Togtokh writes: “We need such a change because, if the UN continues to encourage countries such as Mongolia to aspire to the US lifestyle, we will all be in serious trouble.”
SOURCE: planetsave.com