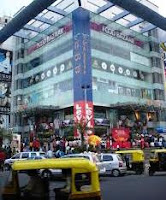 As part of the centennial celebrations of IBM, the company on Tuesday said it is collaborating with Bangalore-based non- profit organisation Centre for Sustainable Development (CSD) to prepare an Environment Report Card (ERC) for the city. The survey will showcase citizens’ perceptions of environmental issues and a factual picture of the city’s environmental condition measured across key parameters.

“This is a global initiative by IBM as part of our centennial celebration.
We internally discussed with our employees for two days and we decided to use skills of the employees to do something for the welfare of the society.
The CSD has done these kind of initiatives earlier also and we decided to work together,” Mamtha Sharma, Manager — Corporate Citizenship & Corporate Affairs, IBM India said

The findings of the survey will be submitted to the state government by November 2011.

The environment report card is expected to provide the authorities a perspective of what citizens consider as priority issues facing in the city. According to the company about 500 IBMers have volunteered to collate data from over 3,000 household respondents across eight zones in the city between August and October 2011. During this period, CSD will collate data from different government departments to supplement the findings.

“We will utilise our global business services business analytics and optimisation consulting expertise and analytics technology platforms to collect, compile, analyse and produce the results for the ERC,” Mamtha Sharma added.

The project will summarise factual data that can stimulate debate on policies intended to benefit environmental protection. The ERC will focus on parameters such as air pollution, traffic congestion, lack of open spaces, drainage, water collection, quality of water, waste/sewage management, noise pollution and other relevant and vital factors impacting health and well-being of citizens.

“One of the significant aspects of the project is that the report will take into account both the data available with government agencies and citizen perspective on the city. We are hopeful that the report will sensitise the stakeholders on the adverse impact of ignoring the environment issues in the city” R Srinivas, Executive Director, CSD said.