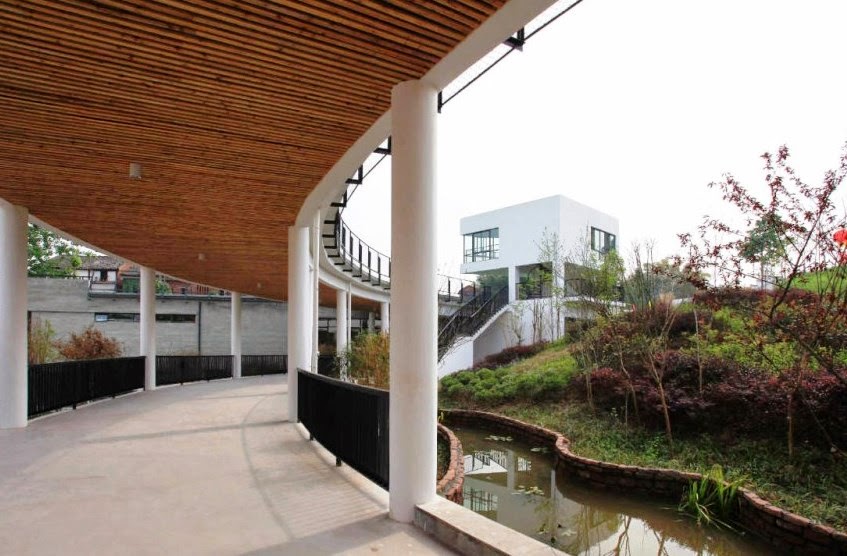 Sponsored and designed by the China US Center for Sustainable Development, a safe and sustainable New Jindai Elementary School for 540 children, survivors of the devastating 2008 Sichuan earthquake, officially opened on April 29, 2011.

A safe and sustainable New Jindai Elementary School for 540 children, survivors of the devastating May 12, 2008 Sichuan earthquake, officially opened on April 29, 2011.

Liangping County suffered the greatest destruction and loss of life in Chongqing as the result of the massive earthquake that hit in 2008. More than 80,000 people perished and thousands of schools crumbled or were deemed unsafe as a result of the disaster.
Occurring on the eve of the third anniversary of the earthquake, the opening ceremony began with a remembrance of the victims of the tragic earthquake. The event was attended by the faculty, students and community members of Jindai Township and Liangping County, in addition to officials from Chongqing municipality and dignitaries from China and the US including representatives from China’s central government, the US Consul General in Chengdu and sponsors who supported the school’s design and construction.

Built near the original school site and using in part recovered material from the original school and emergency structures built after the earthquake, the prototype school was designed through the collaborative efforts of architects, seismic engineers, energy experts and developers from China and the United States.

Sponsored by Liangping County and the China-US Center for Sustainable Development, the school with twelve classrooms was built at a cost of $2.5 million and received major support from the China Institute in America, Walmart China, the Walmart Foundation, Walmart Global Sourcing Employees Fund and the Soong Ching Ling Foundation with the Kobe Bryant China Fund. Other donors include legacy funding from the Heinz Family Philanthropies, the Xiamen Houcaller Management Co., Ltd., the Andringa Family Foundation and the Elizabeth Economy and David Wah family.

According to Ed Chan, President of Walmart China, “The physical and emotional devastation felt by hundreds of thousands of China’s young from that earthquake is incalculable and unimaginable. This school sends a message to them of hope and reassurance. It provides a safe harbor. It says to China’s earthquake children that despite the horror, life can and will get better. It begins to paint a picture of a promising sustainable future."

Dr. Gary Dirks, Chairman of the China U.S. Center’s US Board of Councilors, stated “Everything from its safety and environmental features to its place as a community center, speaks to how special this school is. The seismic resistant construction, quality of finish, the produce garden, the rain-water capture system, the black water processing, the light and openness provided by the angled ceiling are among this school’s features. We also wanted to build a school in partnership with a community that believed in integrating sustainability into the curriculum and could serve as a learning hub for environmental principles. Every brick, every stone, every tile of this school reflects the heart, passion and talents of a great number of people.”

The school’s design was collaboratively developed by a team of architects, engineers, energy experts and developers with hubs in Shanghai China and Portland, Oregon USA. The school is the first of what is hoped to be many other safe and healthy, sustainable and cost effective schools throughout China.

The China US Center for Sustainable Development is a public-private partnership originally formed in 1999. The Center is guided by a joint Board of Councilors. Madame Deng Nan, the daughter of Deng Xiao Ping and the Executive Secretary General of the China Association of Science and Technology, is the China Co-Chair. Gary Dirks, Ph.D. is the US Co-Chair. Dr. Dirks is the Director of LightWorks at Arizona State University and was previously the Chief Executive for BP Asia. Management of the Center is conducted through joint secretariats. The China Secretariat is the Administrative Center for China’s Agenda 21 at the Ministry of Science and Technology in Beijing. The US Secretariat is the International Sustainable Development Foundation, based in Portland, Oregon.