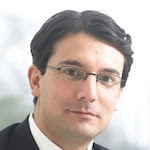 Luke Stellini (pictured), European Product Director, Invesco Henley European Equity Team, examines growing evidence of a recovery in the European stockmarkets.
The year-to-date outperformance of European stockmarkets has surprised many investors. Rather than seeing this as a blip, Invesco Perpetual’s European equity experts believe that some of the underlying reasons for Europe’s early leadership are sustainable. They see substantial evidence of a sustainable recovery in sentiment as the continent continues to navigate away from the storm of default risk that drove extreme antipathy towards the region in 2010.

The combination of an ongoing improvement in sentiment and the low levels of expectations make us confident that the outlook for European equity returns is positive
The early part of 2011 has seen a reversal of the dominant markets and sectors from 2010. Year to date, developed has trumped developing and, within developed, the perennial laggard that is Europe has led the way. We believe this is more than a spell of premature elation based on temporary drivers such as short covering. The important message conveyed by this development is that starting points matter because the consensus can change, with triggers for a reassessment of the consensus notoriously difficult to predict.
Several factors illustrate Europe’s attractive starting point. In valuation terms, Europe looks cheap on the basis of long-term PE, price-to-book ratios and yield comparisons with fixed income. Eurozone institutions’ equity exposure is at a historical low, with any uptrend likely to benefit the domestic asset class disproportionately. In addition, the consensus established over many quarters has been of emerging market growth and developed market debt and stagnation, with Europe taking centre stage as the most challenged by leverage and structures that impede its recovery. Investor sentiment, as measured by flows, has reflected these contrasting views.
With starting points so low, any improvement in sentiment can be strongly felt as witnessed by market movements year to date. There is a subtle change in consensus in Europe driven by an increasing credibility of policy makers’ response to the crisis and an improved backdrop for funding by peripheral countries. Macro data in Europe have also helped convince market participants that the recovery is firmly rooted.
All the while, the “consensus love affair with all things emerging market” has been tested as inflation concerns and the North African revolutions have weighed on developing market performance. Starting points matter and, as the consensus gets stronger, the risk of halo slippage increases with it.