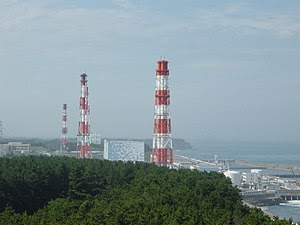 Image via Wikipedia
A massive explosion has struck a Japanese nuclear power plant after Friday's devastating earthquake.
A huge pall of smoke was seen coming from the plant at Fukushima and several workers were injured.
Japanese officials fear a meltdown at one of the plant's reactors after radioactive material was detected outside it.
A huge relief operation is under way after the 8.9-magnitude earthquake and tsunami, which killed more than 600.

Hundreds more people are missing and it is feared about 1,300 may have died.
The offshore earthquake triggered a tsunami which wreaked havoc on Japan's north-east coast, sweeping far inland and devastating a number of towns and villages.
Japan's Prime Minister Naoto Kan declared a state of emergency at the Fukushima 1 and 2 power plants as engineers try to confirm whether a reactor at one of the stations has gone into meltdown.
It is an automatic procedure after nuclear reactors shut down in the event of an earthquake, allowing officials to take rapid action.
Television pictures showed a massive blast at one of the buildings of the Fukushima 1 plant, about 250km (160 miles) north-east of Tokyo.

A huge cloud of smoke billows out and large bits of debris are flung far from the building.
Japan's NHK TV showed before and after pictures of the plant. They appeared to show that the outer structure of one of four buildings at the plant had collapsed after the explosion.
The Tokyo Electric Power Co, the plant's operator, said several workers had been injured.
Cooling systems inside several reactors at both the Fukushima plants stopped working after Friday's earthquake cut the power supply.
Japan's nuclear agency said on Saturday that radioactive caesium and iodine had been detected near the number one reactor of the Fukushima 1 plant.
The agency said this may indicate that containers of uranium fuel inside the reactor may have begun melting.
Air has been released from several of the reactors at both plants in an effort to relieve the huge amount of pressure building up inside.
Mr Kan said the amount of radiation released was "tiny".
Thousands of people have been ordered to evacuate the area near the plants. BBC correspondent Nick Ravenscroft said police stopped him 60km from the Fukushima 1 plant.
Analysts say a meltdown would not necessarily lead to a major disaster because light-water reactors would not explode even if they overheated.
The 8.9-magnitude tremor struck in the afternoon local time on Friday off the coast of Honshu island at a depth of about 24km, 400km (250 miles) north-east of Tokyo.
It was nearly 8,000 times stronger than last month's quake in New Zealand that devastated the city of Christchurch, scientists said.
Some of the same search and rescue teams from around the world that helped in that disaster are now on their way to Japan.