Reading the Shah, and Ayatollahs in Tehran and What the U.S. Should Learn From the History

Image via Wikipedia
What has been the root of the U.S'. inability to develop a sustainable policy or strategy on Iran for the last 30 years? What was not learnt from the Shah's fall in 1979 and the nature of the revolutionaries who hijacked a pro-democracy freedom movement? And what are the parallels between the Shah's regime and the current Islamic government in Tehran?

These are the types of questions that have been raised in my extensive interview with Dr. Abbas Milani, author of the recent book, The Shah, and the director of Iranian Studies at Stanford University in California.
While the Iranian government continues to curb social and political freedom in Iran, particularly after the post-presidential unrests which resulted in killing of dozens and arresting thousands of people, the author of a recent book, The Shah, provides a comprehensive image of parallels that contributed to the fall of the Shah and is now being perpetuated by the Islamists in Tehran. 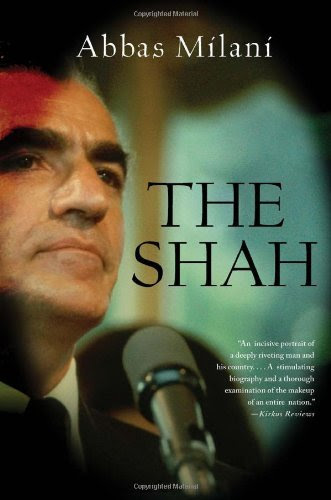 "If we understand why the Shah of Iran fell in 1979, we can understand why the Iranian government is unstable today and based on that, predict what the future of the country could be", Milani told me on the significance of reading The Shah.
The book, which is based on more than 400 interviews and newly-released documents by the American and British embassies, also gives very interesting, first hand information and documented accounts of the way the Shah really was and how we should look at him and Iran's politics today. The 1953 coup and the forces that contributed to such a significant political incident, a view of US-Iran relations and the failure of US intelligence to read Iran's politics are also discussed in the interview.

***
Memarian: Why is learning about the Shah still important three decades after the creation of the Islamic Republic?
Milani: Well, I think for two reasons. One is historic in the sense that he is a very pivotal figure of the twentieth century. There is also room for an impartial biography of him now, based on documents that have only become available the last few months.
Politically, I think this is necessary, because in my view the same dynamic, both in terms of the coalition of forces and in terms of political demand, that overthrew the Shah in 1979, have been the cause of more or less incessant unrest and instability in the Islamic Republic in the last 30 years. That coalition wants democracy, and the usurping clerical establishment essentially aborted demand for democracy and the same coalition continues its, now 100-year-old, dream of democracy. So, if we understand why the Shah fell, we understand why the regime is unstable today and I think we can, based on that, predict what the future of Iran will be; that the current status quo is untenable because it's going against the grain of what the people have empirically shown they want.


Memarian: How about the Shah's relation with his opponents and allies inside the country?

Milani: The Shah had a completely misguided understanding of who his foes and his friends were. He thought that the left and nationalists were his enemies and he thought the religious forces, minus the radicals of course, were his allies. He went after the radicals, and allowed the creation and in fact the enhancement of the incredible network of mosques, hosseineh's [religious gathering places], and Quran readings programs throughout the country.
I found some remarkable statistics on the number of mosques, for example, that were built in the last decade of the Shah, and when you compare that to Reza Shah, [the Shah's father], who literally cut to a third the number of mosques, and to about a third the number of Talabe's [students of seminaries] you see that the Shah had a scorched earth policy against the left and against the center and he allowed the clergy to organize, mobilize, train their Cal Grads, have their schools, collect their funds and when the system went into crisis, that force was the only force that could keep the country together and the Europeans and the Americans decided that they should make peace with [Ayatollah]Khomeini, [the founder of the Islamic Republic].
The book shows very clearly that Khomeini volunteered contacts with the Americans, he answered their questions; and he advised his allies in Iran to negotiate with the American Embassy. So, in almost all of these phases, the reality, at least as far as I have uncovered, is very, very different than what has been, so far, assumed about it.
Memarian: How is it different than the current government in Tehran in dealing with peaceful protests?
Milani: If you look at the number of people killed as a result of assassinations, or through execution by the Shah's regime, the total number is less that 1,500 during his 37-year rule. Ayatollah Khomeini ordered the death of 4,000 people in prison, in a few months in 1988.
Memarian: Regarding your facts and understanding on the Coup, how can we draw a line between the reality and the myth about the Coup, which has occupied the historical memory of a nation.

Milani: I think part of the problem of the U.S. policy in Iran or the U.S.' inability to develop a policy on Iran that has any sustainability is that if you look at it, the US really has not had a strategy on Iran for 30 years. They've gone from one reaction to another. A kind of a strategic vision that is based on a concrete realistic intimate understanding of the situation has been wanting. And one of the reasons it is lacking, and it's difficult to make, is that they have no embassy.
When you have no embassy, when you have no diplomats telling you what is happening on the ground, when you don't have intelligence agencies doing exactly what intelligence agencies are supposed to do, which is report about the realities on the ground, and then you can't come to a good assessment.
...When you don't have an embassy, you become reliant on a phone bank in Istanbul calling 700 people inside Iran, 702 to be exact, and asking them what their opinions are on very sensitive issues. And to think that you could possibly get a correct answer from a call from Turkey to an Iranian living under the current oppression in Iran is a level of desperation that is hard to fathom. It shows a desperate need for information. It shows a level of desperation in accessing information that is truly remarkable; hard to fathom, hard to understand.