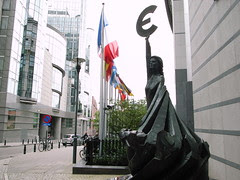 Image by stevecadman via Flickr
The European Parliament voted on a report that puts its support behind enacting a financial transaction tax across the European Union. A financial transaction tax has gained steam as a means of raising revenue for cash-strapped governments, seeking to make banks and other parts of the industry pay for the costs of the global economic crisis. However, it is a contentious topic, and some nations fear such rules could displace a central part of their economies.

The report argues that increasing existing taxes and additional cuts in public budgets isn't a sufficient or sustainable answer to Europe's budget and market woes. However, a tax on transactions would help stabilize markets by curbing speculative and high-frequency trading and reducing price volatility, as well as offer significant revenues. The parliament estimates potential returns of up to EUR200 billion a year at an EU level and $650 billion at the global level.
It says that all spot and derivatives transactions traded on markets and over the counter should be included.
While the parliament's powers have grown since the adoption of the Lisbon Treaty in 2009, it doesn't have the power to propose legislation in the EU and has no authority over financial transaction taxes, according to a spokesperson from the commission.
Still, the EU commissioner for taxation, Algirdas Semeta, said in January that the commission supports further exploration of a financial transaction tax at global level and is working to promote an agreement with Group of 20 member states. However, at the EU level, the commission supports a financial activities tax.
By the summer of 2011, the commission is expected to publish a report that evaluates the impact on financial institutions of new regulation and taxes.
Currency-market insiders are deeply skeptical about talk of a tax on foreign-exchange flows. As an inherently cross-border business, it is unclear which authority would impose and gather the tax, and whether it would apply to all transactions, from hedge-fund flows to deals for tourists traveling abroad.
In addition, with no single venue to trade or settle deals in this $4 trillion a day market, there is no obvious mechanism for collecting such a tax.
Bankers are also concerned about the indirect burden this would place on the cost of cross-border trade and investment, and any knock-on effects it could have.