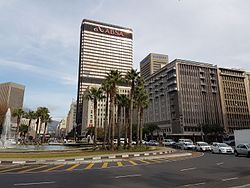 “We expect them to deliver more sustainable earnings over the next two to three years than the market appreciates, driving a re-rating in the sector,” analysts including Greg Saffy and Derinia Chetty wrote in an e-mailed note to clients dated today. “We are overweight on Absa and FirstRand given their dominant domestic exposure and strong and improving franchises.”