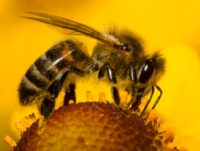 A new UNEP report will show that bee colonies worldwide are under threat, with serious implications for biodiversity and food security.
The report - 'Global Honey Bee Colony Disorders and Other Threats to Insect Pollinators' - finds that multiple factors are responsible for declines in bee populations. These include habitat deterioration, air pollution, crop spraying and the widespread use of insecticides in plant cultivation.

The report finds that tens of thousands of plant species could be lost in coming years unless conservation efforts are stepped up.
The decline of bee populations has serious consequences for food security. Pollination is critical for flower and seed production and vital to the health of ecosystems. As many crops depend solely on pollinators for survival, the well-being of pollinating insects such as bees is critical for ensuring the availability of food for a growing global population.
Source: www.unep.org