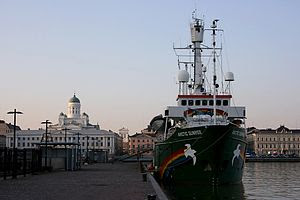 Image via Wikipedia
WILMINGTON, NC (WWAY) -- The Port City sees many ships come and go, but one that arrived today hopes to leave a lasting impression.

While the Arctic Sunrise is in town, Greenpeace plans a peaceful protest including a candlelight vigil against the Sutton power plant. Although Progress Energy already plans to convert the plant from coal to natural gas in 2014, Greenpeace coal campaigner Kelly Mitchell said that's not enough.

"It's promising to see Sutton quit coal, absolutely," Mitchell said. "I think it's a sign that utility companies are realizing there are smarter ways to power our future than coal, but we want to make sure that power is replaced with truly clean energy like wind and solar and through efficiency."

Progress Energy argues the conversion is good for the environment.

"We actually think our Sutton plant is a great example of our firm commitment to improving the environment by modernizing our generation fleet, and switching from coal to natural gas will actually result in a 40 to 50 percent drop in CO2 emissions," Progress Energy spokesman Drew Elliott said.

The power plant is not the environmental group's only target in town. Greenpeace is also joining the fight to stop Titan Cement from building a plant near Castle Hayne.

"This is a plant that's going to burn 150,000 tons of coal per year," Greenpeace climate and energy campaigner Robert Gardener said. "Coal is a thing of the past. It's just not something that we need to continue to lean on as we transition toward this 21st economy."

Mitchell said, "The people of North Carolina, the people around this country, deserve to breathe clean air and clean water, and it's not until we get away from dirty fossil fuels that that's really going to be the case."

Mitchell calls the fight against coal the fight of our lifetime.

"The Carolinas Cement plant will be one of the most technologically sophisticated and environmentally conscious cement plants in the world. Cement is the main ingredient in concrete, which is one of the most sustainable building materials available and second only to water as the most widely used material in the world. We believe that a true environmentalist would want cement produced right here in the United States, where companies like Carolinas Cement are strictly regulated and must conduct business in the most environmentally sensitive manner possible. Shifting cement production offshore to nations that are much more loosely regulated will have a much more negative impact on the health and safety of the global environment."

As for the ship, you can tour the Arctic Sunrise this weekend from 10 a.m. to 4 p.m.