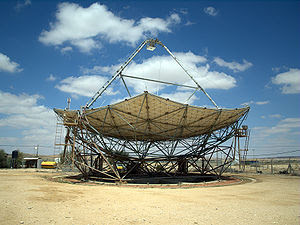 Image via Wikipedia
Over 650,000 acres of land in the United States is ideal for generating solar energy, according to a new report.

Compiled over the past two years as part of the Obama administration's effort to create a framework for developing renewable energy projects, the report is aimed at fostering development. According to a statement from U.S. Secretary of the Interior Ken Salazar, it “will help us site solar projects in the right places, and reduce conflicts and delays at later stages of the development process.”

“Designating appropriate zones and requiring that projects go there is a common-sense way to speed responsible development. Additional zones may be necessary in the future, but what we don’t need is a repeat of the oil and gas mess that has plagued our public lands,” said Alex Daue, renewable energy coordinator at The Wilderness Society in a statement.

The BLM manages about 120 million acres of public land in the area covered in the environmental impact statement. Twenty-two million of these acres would be available for right of way applications for solar development under the report’s preferred alternative, including the 677,400 identified in the report as solar energy zones. However, officials say only about 214,000 acres of this land is anticipated for solar energy production.

The study’s preferred alternative sees the BLM establishing standardized design features for solar energy development, making for a more efficient authorization process. Eight utility-scale solar projects in California and Nevada have already been approved in the last three months. The combined power of these new facilities generates over 3,500 megawatts of electricity.

In a press release for the report, Energy Secretary Steven Chu identified the project as part of an “integrated strategy to cultivate the entire innovation chain to create the jobs of the 21st century economy and to put America on a sustainable energy path.”

The public is being encouraged to comment on the draft plan in 14 open meetings over a 90-day period beginning in Washington, D.C. on Feb. 2.