Banking reform 'on the run' propels us headlong into disaster

THE Treasurer's pledge to increase competition among banks creates more risk for taxpayers. 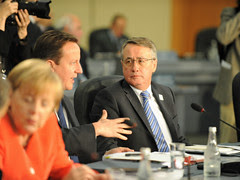 Image by The Prime Minister's Office via Flickr
WAYNE Swan's claim that his banking package would cut interest rates lasted about 24 hours. It was overtaken by the Treasurer's admission that the Reserve Bank set the level of interest rates and that his package was really about empowering big bank customers "to walk down the road and get a better deal".

It also became painfully clear that Swan's "competitive and sustainable banking" package was policy on the run, driven by the politics of rising mortgage interest rates and Joe Hockey's populist bank bashing.

The architecture of Australia's post-financial crisis banking system is not being drafted by a serious policy review by the Council of Financial Regulators - the Reserve Bank, the Australian Prudential and Regulatory Authority, the Australian Securities and Investments Commission and the Treasury - that Labor supposedly relied on to steer the economy through the crisis.


Swan claimed to have been "working methodically with our regulators on this plan for some time". But the Reserve Bank provided no written advice. The Council of Financial Regulators had a phone hook-up with Swan a few weeks ago where "some of the things in the package were briefly touched on", Reserve Bank governor Glenn Stevens told the Senate committee into banking competition this week.

Instead, it's all about Swan's demand for policy "announceables" that the financial regulators have to make sense of and deliver. The result "lacks coherence", will be "difficult to implement" in some areas and "counter-productive" in others, according to Ian Harper, a member of the 1997 Wallis financial system review. It's a grab bag, Harper says.

The headline announceable of banning exit fees on borrowers who want to cut short their contract is a classic. Swan argued that fees allowed the four big banks to hold their customers to "ransom" and smother competition.

But Swan's idea was rejected outright by John Symond, founder of Aussie Homes Loans which, along with other housing loan securitisers such as RAMS and Wizard, did most to force competition into Australia's mortgage lending market out of the early 1990s financial recession. That's because securitisers use such "deferred establishment fees" to compete against the banks by lowering upfront costs for borrowers.

"The banning of exit fees will have the reverse effect by causing non-bank lenders to lose their most effective weapon in competing with banks," mortgage brokers association head Phil Naylor complained to the Senate committee on Tuesday.

And on the run? ASIC has just completed its detailed regulation impact statement setting out what sort of exit fees are not unconscionable under Labor's new national credit code. So scrap that.

More worrying are what Swan's package unpicks. In the wake of the financial crisis, Australian banking "reform" is now considering allowing, even encouraging, financial shops holding less than $50 million in capital to call themselves "banks". You may be able to walk down the street to a mini-bank. But this would increase the chances that, unlike the latest crisis, Australia will suffer bank failures during the next one. The Productivity Commission recommended against lowering the $50m threshold only two months ago.

Swan's package also overturns a half century of Australian banking law that gives depositors first preference over all the assets of a failed bank, and more recently of a building society or credit union.

That's the result of allowing banks, building societies and credit unions to issue bonds "covered" by a pool of high-quality mortgage assets. The bond holders get first claim on these assets if the bank goes bust, pushing depositors back in the queue.

APRA is resisting Swan's covered bonds push, even if it is restricted to 5 per cent or so of bank assets. "The Banking Act says that we must exercise our responsibilities to protect the interests of depositors," APRA chairman John Laker told the Senate committee on Tuesday. "Unless that particular clause in the Banking Act has been changed, our working mandate is set out in law and I know you will hold me accountable."

The irony is that Bank of Queensland chief executive David Liddy complained covered bonds would benefit the big banks and their stronger balance sheets over the regional banks and smaller lenders Swan's package aims to promote. Liddy said it put back the cause for a fifth pillar based on regional banks by 15 years.

Covered bonds may help stimulate a corporate bond market in Australia that gives companies an alternative to bank debt. But they're also about slicing up risk. Because the covered bond holders get first claim over AAA mortgage securities, a bank's remaining assets will become more risky. Who will ultimately bear this risk?

The question feeds into Stevens's suggestion to the Senate banking committee that the intense lending competition in the years up to 2007 reflected reckless under-pricing of risk.

Securitisers were able to raise money cheaply by selling bundled packages of mortgages, allowing them to pass on the "very skinny compensation for risk". And about half the money flowing into the Australian securitisation market came through off-balance sheet vehicles of foreign institutions with "unsound" business models.

Now this money had disappeared forever, Stevens said parts of the finance industry wanted "the public purse" to pay for the increased pricing of risk through subsidies and regulation. He stressed the "high level point" that "the taxpayer is being asked to shoulder more risk, one way or another, in order to facilitiate the provision of private finance".

Stevens pointed to calls by the securitisers - and not taken up by Swan - to extend the government guarantee on deposits to investors in residential mortgage-backed securities. Look what happened in the US, Stevens said.

But Swan's package seems to be pushing more risks on to taxpayers compared to when Labor's financial claims scheme for deposits up to $25,000 was rushed in just before the crisis broke. First, this deposit cap was lifted to $1m during the crisis. The Reserve Bank will push to sharply lower this cap when it is reviewed by October.

But the building societies and credit unions that Swan wants to become Australia's fifth banking pillar are demanding it be kept at $1m.

Second, the crisis has forced banks to increase their reliance on deposits, thus lifting the potential size of "guaranteed" liabilities.

And, third, any individual bank failure could come amid more generalised financial crisis. Other banks could protest that levying them to bail out a failed banks' depositors could destabilise the system, increasing the pressure on taxpayers to foot the bill.

UBS banking analyst Jonathan Mott told the Senate committee that deposit protection instead should be financed upfront by an insurance levy on all banks, building societies and credit unions. This would help protect taxpayers from the "inevitable" eventual failure of a deposit-taking institution.

But an upfront insurance premium also could disadvantage the building societies and credit unions Swan is trying to promote.

Mott said he was concerned that the further $4 billion of commonwealth purchases of residential mortgages in Swan's package could artificially prop up the securitisation market and lead to "a risk transfer from the private sector to the taxpayer".

bias towards the mortgage belt.

Swan's real problem is that the mortgage belt has borrowed too much. Household debt has soared from 50 per cent of income to 150 per cent during the past two decades. Australian house prices are 5 per cent to 10 per cent over-valued, according to the International Monetary Fund this week, and need to correct. And the Reserve Bank is expected to lift interest rates by a full percentage point during the next year or so.

Although dumping the securitisers and getting into a slanging match with Symond, Swan's promotion of building societies and credit unions reflects the bias towards housing finance. This new fifth pillar won't do much for small business finance, where arguably there is a lack of supply.

"Remembering that we have the highest level of household debt in the world and housing affordability is at an all-time low, is now the time we want mortgage lenders to be accelerating credit growth to people who are already heavily indebted?" asked Mott.

A stronger treasurer - a Paul Keating or a Peter Costello - surely would have turned back Hockey's paintball attack to concentrate on Australia's genuine post-crisis financial issues and the nation's stalled productivity agenda. Instead, Swan has clumsily attacked the two industries - big mining and big banking - that got us through the global crisis, delivered poor policy and got to be acting PM.