Russia’s top priorities in the Arctic 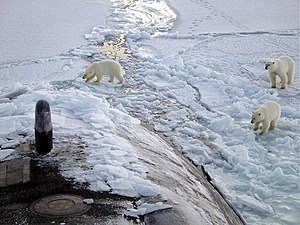 Image via Wikipedia
Russia’s top priorities in the Arctic as articulated at the Forum include:
Russian speakers underscored that Russia, as one of the claimants, is responsible for the sustainable development of the Arctic. The Arctic will become a major source of energy resources and a key global transport hub in the next 50 years.


But the price of Arctic development is much higher than those billions of barrels of crude oil or natural gas. An irresponsible attitude towards the Arctic will spell global problems, rather than global advantages, in the near future. Russia likes to propose an active exchange of ideas, innovations and practical experience.
Russia is planning to revive and build up its research presence in the Arctic, supporting fundamental studies, including those carried out by international teams of scientists and experts.
Putin declared in his speech to the Forum that he was in no doubt whatsoever that the existing problems of the Arctic, including those of the continental shelf, can be resolved in a spirit of partnership, through negotiations, on the basis of existing international legal norms. Russia will prove its claims with the required scientific data.
However, Alexander Frolov, Head of the Federal Hydrometeorology and Environmental Monitoring Service, emphasized “Russia has very serious interests [in the Arctic] – geopolitical, scientific and economic.” Russia is a leading world power with global interests and “we cannot confine ourselves to the Moscow principality.”
The Arctic will become one of the major areas for the international cooperation in the upcoming decade. To encourage cooperation on research in the Arctic Russia initiated an International Polar Decade, which will focus on studies of global climate change and other issues linked to the Arctic in one way or another.
Playing down any fears of a coming “struggle over the Arctic”, only “civil” issues such as climate change or sustainable development were discussed.
Security or even military and defense aspects, that could shape future transit routes, oil and gas exploration rights, economic development, protection of minorities, and military strategies – training missions and missiles positioning – were not mentioned. This will be a subject of my next articles on Second Line of Defense.
In this context, it looks as if the biggest threat to Russia comes not from global warming but from the “globalization/internationalization” of the issue. “Climate is changing” and this is maybe happening regardless of human activity.
However, especially energy-related issues and regions like the Arctic – or the Caspian Sea and Siberia – are highlighted in the security planning through 2020. Thus, the Russia’s National Security Strategy from 2009 proposes the creation of a new military force for the Arctic.
According to Russia’s Maritime Doctrine of Russian Federation 2020 Russia’s “National Maritime Policy for the Arctic regional direction is determined by the particular importance of providing free access of Russian ﬂeet in the Atlantic, wealth of the exclusive economic zone and continental shelf of the Russian Federation, the crucial role of the Northern Fleet for the defense of the state of marine and ocean areas, as well as the increasing importance of the Northern Sea Route for sustainable Development of the Russian Federation.”
Russia is planning to spend around 2 billion rubles ($64 million) on research in the next three years to prove its claims. As already announced on the International Arctic Forum, on October 3, 2010, Artur Chilingarov was heading a new expedition – “expedition Shelf-2010″ – for the North Pole to gather scientific data in support of Russia’s claim on Arctic territories. Russia also plans to create a multi-functional satellite system to be known as Arctic.
Russian speakers highlighted their hope that the Forum marks a significant milestone in the history of international Arctic events. The Forum shall help continue the time-honored traditions in the field of the Arctic exploration and tackling the region’s major problems. In future, the International Arctic Forum will focus on the challenges of climate change, the effects of human activity, issues concerning natural resources and ways to ensure sustainable development in the Arctic region.
It should be noted that in 2001 Russia made an official submission into the United Nation Commission on the Limits of the Continental Shelf[1] in accordance with the United Nations Convention on the Law of the Sea (article 76, paragraph 8), proposing to establish new limits of Russia’s continental shelf, i.e. beyond the determined 200 mile zone. The United Nation Commission rejected the Russian proposal in 2002 as sufficient scientific evidence is lacking.
If Russia can prove that that the Lomonosov Ridge and the Mendeleev Ridge are the extension of the Russian continental shelf, the country will receive another 1.2 million square kilometers territory of the Arctic. This access allows Russia to explore and develop huge oil and gas fields in the triangle between the Chukotka Peninsula, Murmansk and the North Pole. The adjusted Russian claim for the Arctic shelf is expected to be prepared by 2013.