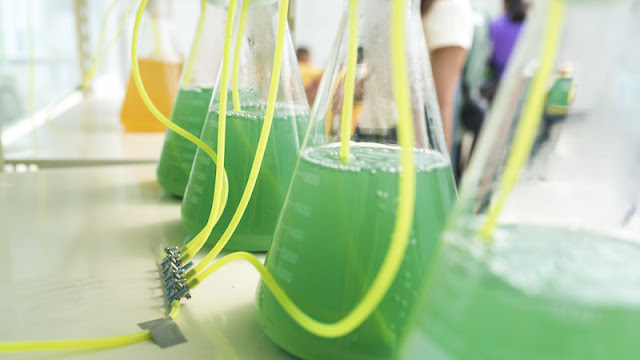 Industrial biotechnology draws from biology and the billions of years of evolution behind it to make the production of any chemical compound more efficient and more sustainable. In Europe, the industrial biotech sector is rapidly growing as a response to the environmental impact of current chemical production methods used in all industries.

A spin-off from Shell, Avantium is developing renewable materials from plant sugars. One of its most notable applications is the development of 100% renewable bioplastics. The technology has managed to lure big brands, with ongoing projects to make bottles for Coca Cola and yogurt cups for Danone. With two pilot plants opened in the Netherlands, the company uses forestry and agricultural byproducts as a sugar source to avoid competing with crops intended for food production.

This French company uses agricultural and forestry waste to make isobutene through microbial fermentation. This chemical derived from petroleum is a major staple of the petrochemical industry, used in fuels, natural gas, rubber, plastics, lubricants and cosmetics among others. Among many other applications, Global Bioenergies is working with Audi to make sustainable gasoline.

Carbios seeks to make PET, one of the most commonly used plastics, fully recyclable. The company has developed an enzymatic technology that can break down 97% of PET waste. The resulting components can then be used to make 100% recycled plastic bottles. Later this year, Carbios is planning to open a demonstration plant that will take it closer to the commercialization of its technology.

AMSilk creates high-performance materials made of spider silk protein produced by engineered bacteria. The range of applications seems limitless. AMSilk is working with Adidas on a biodegradable running shoe, and with Airbus on lightweight materials for plane construction. So far, the largest application of these proteins is in cosmetics — this arm of the business was acquired by the Swiss company Givaudan earlier this year. Other uses in development include medical implants and vaccine delivery.

Algalife founder Renana Krebs used to work in the fashion industry, where she became aware of the huge environmental impact of this industry. Her company uses algae to produce fibers that are used to make clothes, as well as textile dyes. The goal is to reduce the use of water and to cut the need for toxic chemicals. Algalife is first eyeing the home and sportswear market, with the goal to start selling its unique clothing by 2020.

This biotech startup seeks to disrupt the unsustainable production of dyes. PILI uses microbial fermentation to produce the same chemicals used to dye textiles. This could reduce water use by 5 times and carbon dioxide emissions by 10 times as compared to the petrochemical processes currently used in the dyeing industry. In addition, it can reduce the use of petroleum and toxic chemicals.

Inspired by jellyfish blooms in the coast of Scotland, Jellagen co-founder Andrew Mearns Spragg decided to use this animal to source collagen. The most abundant protein in the body, collagen is often used in the medical and cosmetic industries. Obtaining collagen from jellyfish rather than cows or pigs makes the product safer, as it is less likely to carry mammalian diseases.

Aquaporin aims to make water purification faster and more efficient than with traditional reverse osmosis. The company uses membranes seeded with molecules called aquaporins, which transport water molecules through the membrane but leave any contaminants behind. One interesting application of this technology is to recycle water in space, which Aquaporin is testing in partnership with the Danish Aerospace Company.

Conveniently located near the sea, Biomimetx develops an anti-fouling paint additive that prevents microorganisms from latching onto and growing on boats. The company uses bacteria to produce an environmentally friendly alternative to current toxic anti-fouling paint. The additive is biodegradable, degrading within one month when it leaches into the water.

Gene & Green TK is developing enzymes to degrade organophosphates, which are used as toxic insecticides and chemical warfare agents — including the VX nerve agent used to kill former North Korean leader King-Jong Nam. The enzymes are derived from the extremophile microorganism Sulfolobus solfataricus, which lives in volcanic pools in Italy.

Deinove screens rare microorganisms to find useful molecules. This has led to the development of an anti-aging cosmetic ingredient that is produced by the extremophile bacterium Deinococcus geothermalis, which survives in the volcanic hot springs of Reunion Island in the Indian Ocean. The company has several other cosmetics in development, as well as new types of antibiotics and feed additives.

Agrosavfe takes inspiration from the antibodies of animals like llamas and camels to develop fungicides. These molecules are targeted exclusively to a specific pest, preventing damage to other insects such as pollinators. The company’s biofungicides have also been proved to be safe for consumers and for the environment, cutting food loss by 70% and chemical residues by 40% compared to conventional pesticides.

Micropep works on natural crop biostimulants and herbicides as an alternative to chemical products. The company develops micro-peptides, molecules that regulate gene expression without altering the plant DNA. They can be used to specifically stimulate the germination, flowering or growth of a crop, or for weed control. The micro-peptides work on the target crop, without affecting other plants or insects.

A spin-off from Oxford University, Oxitec uses genetic engineering for insect control. By introducing a gene that kills the female offspring of mosquitoes, the company has managed to massively reduce local populations of disease-carrying mosquitoes in Brazil, India and Panama among other places. Oxitec is also using the technology to control pests that attack food crops, such as some species of caterpillars or moths. Since 2015, Oxitec is a subsidiary of US-based Intrexon Corporation.

Biophero aims to replace insecticides with a natural alternative: pheromones. Applying pheromones to crops can mask the pheromones that female insects use to attract males, reducing mating. In addition, pheromones are not toxic to humans and evaporate over time, leaving no toxic chemical remnants. The company has developed a method to produce these molecules through yeast fermentation, making their industrial production affordable.

Metgen develops custom enzymes to make industrial production of paper, chemicals and biogas more efficient and sustainable. The enzymes are engineered to adapt to thrive in harsh industrial conditions to drive up efficiency. The company also offers enzymes that can efficiently use wood waste as a raw material, a challenge that can often increment the cost and energy it takes to process this kind of material.

A spin-off from the Université d’Auvergne, Metabolic Explorer has the goal of offering alternatives to petrochemicals in all industries. Its first product is intended to replace the petrochemical production of methionine, an amino acid used as a cost-effective additive to animal feed. The company also seeks to produce textiles and packaging materials.

A spin-off of the University of Amsterdam, Photanol is dedicated to creating chemicals using solely light and carbon dioxide. The trick consists of genetically engineering cyanobacteria, which are natural photosynthesizers, to produce the desired chemicals. The company is targeting first the production of high-value compounds such as organic acids used to create polymers.

GF Biochemicals boasts that it is the only company producing levulinic acid directly from biomass instead of petroleum. This organic acid and its many derivatives have a huge range of applications, including cosmetics, solvents, detergents, coatings, flavors, fragrances, fuels and polymer materials. The company has plans to open the largest biorefinery plant in the US in partnership with the company American Process.

Afyren uses microbial fermentation to produce a range of organic acids from waste biomass. The company currently produces seven organic acids that can otherwise only be produced using petrochemical processes. The applications range from cosmetics to flavors and fragrances, also including nutrition and fine chemicals. Afyren is now in the process of scaling up its production with a new fermentation plant.