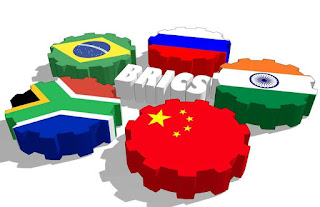 Here is the excerpt from the Goa Declaration adopted by the BRICS member nations:

Recalling all our previous declarations, we emphasize the importance of further strengthening BRICS solidarity and cooperation based on our common interests and key priorities to further strengthen our strategic partnership in the spirit of openness, solidarity, equality, mutual understanding, inclusiveness and mutually beneficial cooperation. We agree that emerging challenges to global peace and security and to sustainable development require further enhancing of our collective efforts.

We agree that BRICS countries represent an influential voice on the global stage through our tangible cooperation, which delivers direct benefits to our people. In this context, we note with satisfaction the operationalization of the New Development Bank (NDB) and of the Contingent Reserve Arrangement (CRA), which contributes greatly to the global economy and the strengthening of the international financial architecture.

We welcome the report presented by NDB President on the work of the Bank during the first year of its operations. We are pleased to note the progress in operationalizing the Africa Regional Centre (ARC) of the NDB and pledge our full support in this regard. We look forward to developing new BRICS initiatives in a wider range of areas in the years to come.

We note with appreciation the approval of the first set of loans by the New Development Bank (NDB), particularly in the renewable energy projects in BRICS countries. We express satisfaction with NDB's issuance of the first set of green bonds in RMB. We are pleased to note that the operationalization of BRICS Contingent Reserve Arrangements (CRA) has strengthened the global financial safety net.

In order to reach out and enrich our understanding and engagement with fellow developing and emerging economies, we will hold a Outreach Summit of BRICS Leaders with the Leaders of BIMSTEC member countries – Bay of Bengal Initiative for Multi-Sectoral Technical and Economic Cooperation comprising of Bangladesh, Bhutan, India, Myanmar, Nepal, Sri Lanka and Thailand. The meeting will be an opportunity to renew our friendship with BIMSTEC countries as well as to jointly explore possibilities of expanding trade and commercial ties, and investment cooperation between BRICS and BIMSTEC countries, while advancing our common goals of peace, development, democracy and prosperity.

We reiterate our common vision of ongoing profound shifts in the world as it transitions to a more just, democratic, and multi-polar international order based on the central role of the United Nations, and respect for international law. We reaffirm the need for strengthening coordination of efforts on global issues and practical cooperation in the spirit of solidarity, mutual understanding and trust. We underline the importance of collective efforts in solving international problems, and for peaceful settlement of disputes through political and diplomatic means, and in this regard, we reiterate our commitment to the principles of the Charter of the United Nations.

We note the global character of current security challenges and threats confronting the international community. We reiterate our view that international efforts to address these challenges, the establishment of sustainable peace as well as the transition to a more just, equitable and democratic multi-polar international order requires a comprehensive, concerted and determined approach, based on spirit of solidarity, mutual trust and benefit, equity and cooperation, strong commitment to international law and the central role of the United Nations as the universal multilateral organisation entrusted with the mandate for maintaining international peace and security, advance global development and to promote and protect human rights. We underline the importance of further strengthening coordination of our efforts in this context.

We reaffirm our commitment to contribute to safeguarding a fair and equitable international order based on the purposes and principles of the Charter of the United Nations including through consistent and universal respect and adherence to the principles and rules of international law in their inter-relation and integrity, compliance by all states with their international legal obligations.We express our commitment to resolutely reject the continued attempts to misrepresent the results of World War II. We recall further that development and security are closely interlinked, mutually reinforcing and key to attaining sustainable peace.

We remain confident that resolving international problems require collective efforts for peaceful settlement of disputes through political and diplomatic means. Implementation of principles of good-faith, sovereign equality of States, non-intervention in the internal affairs of States and cooperation excludes imposition of unilateral coercive measures not based on international law. We condemn unilateral military interventions and economic sanctions in violation of international law and universally recognised norms of international relations. Bearing this in mind, we emphasise the unique importance of the indivisible nature of security, and that no State should strengthen its security at the expense of the security of others.

We recall the 2005 World Summit Outcome document. We reaffirm the need for a comprehensive reform of the UN, including its Security Council, with a view to making it more representative, effective and efficient, and to increase the representation of the developing countries so that it can adequately respond to global challenges. China and Russia reiterate the importance they attach to the status and role of Brazil, India and South Africa in international affairs and support their aspiration to play a greater role in the UN.