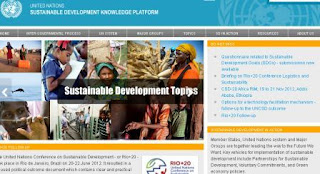 The United Nations Conference on Sustainable Development - or Rio+20 - took place in Rio de Janeiro, Brazil on 20-22 June 2012. It resulted in a focused political outcome document which contains clear and practical measures for implementing sustainable development.
In Rio, Member States decided to launch a process to develop a set of Sustainable Development Goals (SDGs), which will build upon the Millennium Development Goals and converge with the post 2015 development agenda.
The Conference also adopted ground-breaking guidelines on green economy policies. Governments also decided to establish an intergovernmental process under the General Assembly to prepare options on a strategy for sustainable development financing. Governments also agreed to strengthen the United Nations Environment Programme (UNEP) on several fronts with action to be taken during the 67th session of the General Assembly. They also agreed to establish a high-level political forum for sustainable development. Decisions on its detailed form are expected to be taken during the upcoming session of the General Assembly, with the aim of having the first session of the forum at the beginning of the 68th session of the Assembly. Governments also requested the United Nations Statistical Commission, in consultation with relevant United Nations system entities and other relevant organizations, to launch a programme of work in the area of measures of progress to complement gross domestic product in order to better inform policy decisions. Governments also adopted the 10-year framework of programmes on sustainable consumption and production patterns, as contained in document A/CONF.216/5, and invited the General Assembly, at its sixty-seventh session, to designate a Member State body to take any necessary steps to fully operationalize the framework. The Conference also took forward-looking decisions on a number of thematic areas, including energy, food security, oceans, cities, and decided to convene a Third International Conference on SIDS in 2014. The Rio +20 Conference also galvanized the attention of thousands of representatives of the UN system and major groups. It resulted in over 700 voluntary commitments and witnessed the formation of new partnerships to advance sustainable development.