The G20 in Seoul: It's a Whole New World 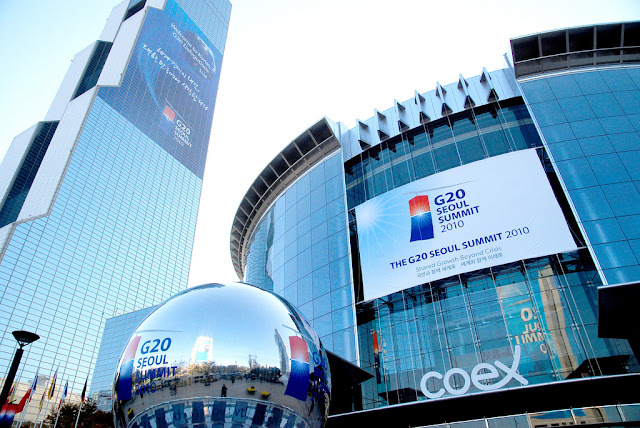 Two years after it succeeded the G7 as the world’s primary venue for economic cooperation the G20 is running into a reality that limited its predecessor and is only more constraining since China, India, Brazil and 10 more interests took seats at the big table: Different national conditions demand different policies.

Here’s another stark fact: When you’re biggest economy on the planet you can do pretty much as you please, and describe it in whatever terms you choose. Thus the US Federal Reserve embarks on a second round of quantitative easing, despite the damage it may do to the US dollar and the implications for other countries that already do or would like to export their way to economic health.

Turning to another front with important implications for investors, in the wake of a resounding defeat in Nov. 2 midterm elections Congressional Democrats and President Obama are more likely to pass and sign a bill that merely extends preferential tax rates on dividends and capital gains rather than enact a permanent policy. Events of the last 24 months have also re-shaped the debate on this issue.

Uncertainty surrounding the global economy, the financial system, and the fundamental health of what remains the world’s most important market is exacerbated by tensions at the international level and within domestic US politics. The threat of a trade war is destabilizing, and the American political situation will likely mean another two years debating the Bush tax cuts.

The calm in the center of these storms remains Canada, whose economy remains on a sustainable path and whose currency stands to benefit from US dollar debasement and rising commodity prices.

In his public turn before this week’s G20 Summit in Seoul Canadian Prime Minister sought to remind his peers about the unity of ’08 and the positive outcomes of their cooperation. At that time coordinated rate cuts, capital infusions, asset purchases and bailouts stabilized then gradually resuscitated a global financial system gone hypothermic. The down-the-line impact of the credit freeze had been felt almost immediately and in nearly every economy of significance. It was a common problem deserving of a common response.

But different countries entered the crisis with different sets of positives and negatives. Some were already saddled with enormous public debt. Others reigned in spending, balanced books and paid down deficits when times were good, setting themselves up to provide effective countercyclical measures. And obviously the US financial system, more than any other, abetted by a long, bipartisan list of elected officials and agency heads, led the world to the brink.

This final item can’t be overemphasized: The massive build-up in real estate--inventory, prices, securitizations--during the middle part of the last decade represents an extraordinary misallocation of capital and resources. It will take a long time to work through its consequences.

Canada, on the other hand, never experienced a subprime real estate bubble. It ran balanced budgets for the decade ending in fiscal 2008 and made a dent in its federal debt. Constructive relations between major financial institutions and government regulators make for a stable, unspectacular banking system that’s more utility-like than casino-like. And its ample commodities, including the oil sands, separate it from its old G7 peers.

The bottom line is many countries have recovered and are on sustainable growth trajectories. The US, on the other hand, still isn’t producing enough jobs to reduce unemployment. And the Fed is still worried about deflation. In a briefing with reporters after a meeting with Mexican President Felipe Calderon ahead of his appearance before the full Summit in Seoul Mr. Harper observed that “under the circumstances” QE2 is the Fed’s only short-term option to kick-start a struggling economy. There are two circumstances to which Mr. Harper, a shrewd political operator, likely alludes.

For its part, the Fed cut its target overnight rate to its lowest possible level in December 2008. Its primary tool for meeting its “dual mandate”--that it pursue policies that promote “full employment” and “price stability”--is useless right now. And the Canadian prime minister knows, perhaps better than any other world leader, that political chasms make the prospect of more fiscal stimulus legislation not just unrealistic but downright laughable.

Given that his country is the No. 2 in the largest bilateral trade relationship in the world it stands to reason that Mr. Harper is familiar with the broad contours of US domestic politics and the economy and. It’s his job to know what’s happening with his country’s largest trading partner and to nourish the relationship. However tempting it is to describe Mr. Harper’s defense of the Fed’s QE2 program as a junior partner doing as he should, it must be noted that the prime minister really doesn’t screw around when it comes to pursuing his own best interest.

His bottom line is that a healthy US economy is good for Canada. Right now US policymakers are left with QE2 as the only viable option to get the domestic economy growing at a pace that brings down unemployment. This, they believe, is the best contribution they can make to the global economy, which includes a lot of countries that need Americans to consume their output.

The express goal of QE2, stated by none other than Fed Chairman Ben Bernanke in no less a forum than the Washington Post, is essentially to boost asset prices, including those for stocks:

This approach eased financial conditions in the past and, so far, looks to be effective again. Stock prices rose and long-term interest rates fell when investors began to anticipate the most recent action. Easier financial conditions will promote economic growth. For example, lower mortgage rates will make housing more affordable and allow more homeowners to refinance. Lower corporate bond rates will encourage investment. And higher stock prices will boost consumer wealth and help increase confidence, which can also spur spending. Increased spending will lead to higher incomes and profits that, in a virtuous circle, will further support economic expansion.

In this construct a weaker dollar, however foreseeable, is an unintended consequence. Prime Minister Harper is saying the right things right now, primarily because he can afford to. Canada is fundamentally sound, the world wants and needs its resources, and his political support for a beleaguered but critical senior partner will eventually be rewarded.

The last two years have clearly been unkind to Democrats, perhaps none more so than President Obama. The Huffington Post, a widely followed news and commentary aggregator aimed at Blue America, reported Thursday morning that White House Senior Advisor David Axelrod conceded that President Obama would sign a compromise bill that extends Bush-era reductions in dividend and capital gains tax rates for all taxpayers for two years. The political environment has shifted as a result of the Nov. 2 midterm Congressional elections, explained Axelrod, and policy must be made within this new reality.

Attempting to walk back his comments for the benefit of supporters on the left appalled at the appearance of caving to Republicans, Axelrod later said, “We believe that it’s imperative to extend the tax cuts for the middle class, and don’t believe we can afford a permanent extension of tax cuts for the wealthy.” That sounds a lot like the temporary two-year extension for everyone implied in the HuffPo report. If Congress doesn’t act before Dec. 31, the cuts will expire and investors will pay tax on dividends and capital gains at ordinary top marginal rates. Nobody wants that.

As we enter the lame-duck period for the 111th Congress we’re essentially preparing for two more years of uncertainty on of this issue, which could have been solved as part of the first fiscal stimulus debate back in 2009. “The Bush tax cuts” will clearly make an interesting topic for the first presidential debate of the 2012 cycle, now only a couple months away.

The bottom line for income investors: Congress is likely to pass and President Obama will sign a bill that, with one hand, extends preferential tax rates on dividends (and capital gains) for all taxpayers for two years and, with the other, jerks the market around by ensuring this potato will stay hot through the 2012 election season.

As for quantitative easing, it’s fraught with potential problems, not least of which is a potential race to the bottom featuring the world’s major currencies. Governments that choose to boost domestic economies by making their exports more attractive on the global marketplace have to keep their currencies low relative to the US dollar, the reserve currency and the grease for the global economy. If other countries undertake currency weakening measures such as quantitative easing the desired effect of rising exports won’t materialize. All you’re left with is inflation, which is likely to show up first in rising oil prices.

Scared about America’s potential debt implosion? Personal responsibility demands that you protect yourself and your portfolio. Buy Canada as a hedge against the collapse of the US dollar--specifically Canadian income trusts that will soon be high-yielding corporations and those that have already made the transition. And enjoy another two years of preferential rates; the high payouts should at least mitigate some of the aggravating uncertainty.