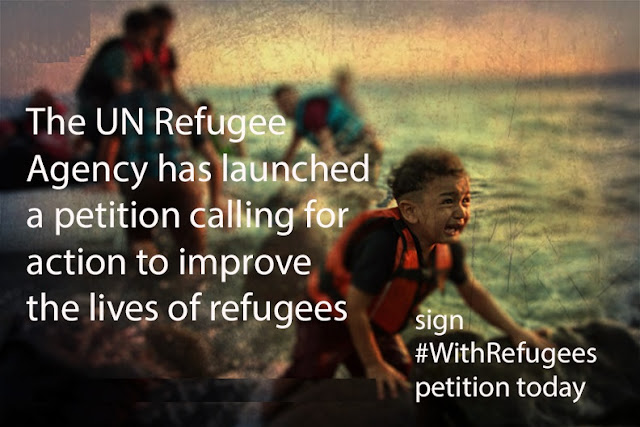 In a world where violence forces thousands of families to flee for their lives each day, the time is now to show that the global public stands with refugees.

To do this, the UN Refugee Agency launched the #WithRefugees petition in June 2016 to send a message to governments that they must work together and do their fair share for refugees.

On World Refugee Day, held every year on June 20th, we commemorate the strength, courage and perseverance of millions of refugees. This year, World Refugee Day also marks a key moment for the public to show support for families forced to flee.

June 20 is the day the world commemorates the strength, courage, and perseverance of millions of refugees. Held every year, World Refugee Day also marks a key moment for the public to show support for families forced to flee.

In September 2016, global leaders agreed to work towards a Global Compact for refugees in 2018 where all parts of society stand together #WithRefugees and do their fair share instead of leaving individual states to bear the burden of mass forced displacement.

You can call on these governments to keep their promise by signing the #WithRefugees petition. It asks them to make sure:
Every refugee child gets an education
Every refugee family has somewhere safe to live
Every refugee can work or learn new skills to support their families.
In a world where one in every 113 people have been forced to flee their homes because of war or persecution it’s vital we demonstrate the global public stands #WithRefugees.

On 4 December 2000, the United Nations General Assembly in Resolution 55/76 decided that, from 2001, 20 June would be celebrated as World Refugee Day. In this resolution, the General Assembly noted that 2001 marked the 50th anniversary of the 1951 Convention relating to the Status of Refugees.[1]

African Refugee Day had been formally celebrated in several countries prior to 2000. The UN noted that the Organization of African Unity (OAU) had agreed to have International Refugee Day coincide with Africa Refugee Day on 20 June.[1]

In the Roman Catholic Church, the World Day of Migrants and Refugees is celebrated in January each year, having been instituted in 1914 by Pope Pius X.

Each year on June 20 the United Nations, United Nations Refugee Agency (UNHCR) and countless civic groups around the world host World Refugee Day events in order to draw the public's attention to the millions of refugees and Internally displaced persons worldwide who have been forced to flee their homes due to war, conflict and persecution.

The annual commemoration is marked by a variety of events in more than 100 countries, involving government officials, humanitarian aid workers, celebrities, civilians and the forcibly displaced themselves.

Refugees are among the most vulnerable people in the world. The 1951 Refugee Convention and its 1967 Protocol help protect them. They are the only global legal instruments explicitly covering the most important aspects of a refugee’s life. According to their provisions, refugees deserve, as a minimum, the same standards of treatment enjoyed by other foreign nationals in a given country and, in many cases, the same treatment as nationals.

The 1951 Convention contains a number of rights and also highlights the obligations of refugees towards their host country. The cornerstone of the 1951 Convention is the principle of non-refoulement. According to this principle, a refugee should not be returned to a country where he or she faces serious threats to his or her life or freedom. This protection may not be claimed by refugees who are reasonably regarded as a danger to the security of the country, or having been convicted of a particularly serious crime, are considered a danger to the community. 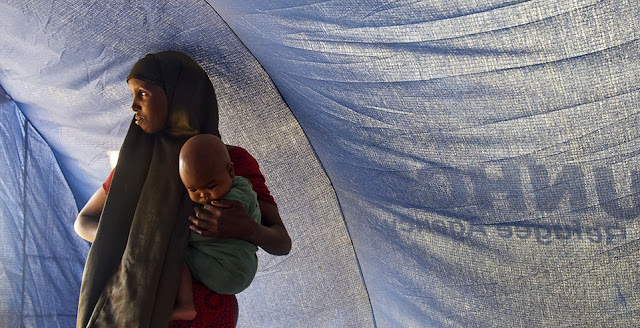 The rights contained in the 1951 Convention include:

Office of the United Nations High Commissioner for Refugees

The Office of the United Nations High Commissioner for Refugees (UNHCR), also known as the UN Refugee Agency, was established on 14 December 1950 by the United Nations General Assembly. The agency is mandated to lead and coordinate international action to protect refugees and resolve refugee problems worldwide. Its primary purpose is to safeguard the rights and well-being of refugees. It strives to ensure that everyone can exercise the right to seek asylum and find safe refuge in another State, with the option to return home voluntarily, integrate locally or to resettle in a third country. It also has a mandate to help stateless people.

UNHCR's mandate distinguishes it from other humanitarian actors, requiring it to provide international protection to refugees who do not enjoy the protection of their governments. It also recognizes that international cooperation and support are needed to complement the efforts of the host country, which bears the primary responsibility for meeting the needs of refugees.

Rebuilding Lives in Peace and Dignity

UNHCR provides legal protection for refugees and seeks long-lasting solutions to their problems, by helping them either return voluntarily to their homes or settle in other countries. Its objective is to help refugees and other forcibly displaced persons rebuild their lives in peace and dignity.

The agency aims to uphold the rights of all displaced people, including women, children, older persons and people living with disabilities. Its seeks to reunite them with their families, protect them from sexual exploitation, abuse, violence and military recruitment, and offers education and training, health services, etc.

When there is a massive influx of refugees or internally displaced persons (IDPs) in a region, UNHCR can dispatch 300 skilled personnel in less than 72 hours following a crisis and leads the relief action to provide refugees and IDPs with emergency shelter — refugee camps, collective centres, makeshift shelters — and essential goods, including tents, blankets and plastic sheeting.

UNHCR also helps build clinics, schools and water wells for shelter inhabitants and gives them access to health care and psychosocial support during their exile. It coordinates family reunification activities and demobilization, disarmament and integration programmes for children associated with armed forces.

A refugee’s voluntary repatriation to her or his country or region of origin is considered the most successful outcome of all. Upon a refugee’s return home, UNHCR organizes “go-and-see” follow-up visits and provides safety information while engaging in community reconciliation activities and providing legal aid.

Refugees who cannot return home often locally integrate into host societies or resettle in a third country. In such cases, UNHCR supports integration programmes, such as cultural orientation, language and vocational training, and offers legal advice as well as psychological support to ensure that people are well integrated and resettled into societies in peace.

Out of the estimated 15.2 million refugees in 2011, 4.8 million were Palestinian refugees registered with United Nations Relief and Works Agency for Palestine Refugees in the Near East (UNRWA).