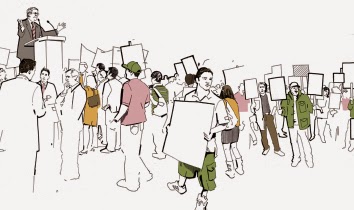 If you do, have you ever heard discussion of the risks associated with employee turnover, staff diversity or plant emissions (other than a major oil spill)? As we have learned in The HIP Investor book excerpts, all of these factors impact shareholder value - because they are leading indicators of profitability.


But HIP's analysis of transcripts, shareholder meetings, and investment analyst conference finds scarce examples of CEOs, CFOs and investor relations executives discussing these performance metrics, and how they link to the top- and bottom-lines. It's actually quite shocking. It's as if companies are driving in their car, looking in the rear view mirror, while talking to investors on their cell phone updating their position on map that has no labeling of the cliffs and waterfalls - or the bridges to cross them.

Who is proactively communicating these leading indicators? How are they doing it? In this week's article, you will read examples of firms communicating to shareholders the benefits of sustainability-from investor-focused advertising to analyst briefings to shareholder meetings to their investor relations communications. This is HIP, as it builds Trust through more openness and transparency. It can also lead to higher demand of the stocks and bonds of these companies by sustainable investors, resulting in higher valuations and lower cost of capital.

Strategically Communicating with Investors A company's valuation depends not only on the fundamentals of sales, costs, and taxes, but also on the supply and demand for the firm's stock. When more investors demand that stock, the price can rise. Investors might desire a particular stock for increased expectations of growth, such as from a new product, like Apple's (NASDAQ: AAPL) iPad. Investors are also looking for new sources of competitive leadership, and sustainability is one of those themes.

Companies communicate with investors in a variety of ways to keep them informed. Quarterly earnings calls update the latest financials and expectations, but are typically only attended by Wall Street analysts and those with large institutional holdings. Shareholder meetings invite all investors, big and small. Special meetings just for analysts dig deeper into a company's strategic plans. Sometimes, even mass-media advertising is a strategy. Let's explore how companies communicate with investors to increase transparency about their organizations and their initiatives that deliver both human impact and profit-which can also lead to increased demand for their stock.
Investment Analyst EngagementEngaging the investment community is a "chicken and egg" quandary, says Dave Stangis, currently at Campbell's and formerly of Intel Corp. Stangis managed the investor relations for CSR at Intel, which started holding meetings both with traditional analysts to educate them about sustainability and with CSR analysts to update them on the financial side. "You need to manage sustainability as a competitive advantage," Stangis advises.
While annual reports and 10-K documents require disclosure of environmental and other risks, they do not frequently mention the opportunities. At Campbell's, "sustainability" is now one of the seven core business strategies, and it's why Stangis was recruited to join the company.
"Every analyst that covers us gets a whole briefing on environmental aspects and sustainability of the overall business," Stangis says. The CFO and CEO are committed to integrating these elements into investor communications, including at the Consumer Analyst Group of New York (CAGNY). "Health and wellness is anchored in our presentations," Stangis adds. At Intel and at Campbell's, Stangis has brought both the do-good impact-investor and traditional-minded capitalist investors into the common conversation about business value and sustainability. "Typically, 'mainstream' analysts would not ask about the environment or employees, and some socially responsible investors do not ask deep questions about the financials," Stangis explains. The latest results of Campbell's sustainability were reported by Reuters.
"I see investors increasingly integrating both elements of human impact and profit, like HIP does, and thinking in a more strategic way," Stangis concludes. "Business has an impact on the social side, and the social side does on business if it's thought about and constructed strategically."
Advertising for Investors Back in 2005, one of the more HIP industrial companies, United Technologies Corp (NYSE: UTX), the maker of Otis elevators and Pratt & Whitney engines, sensed investors were not fully aware of all the innovative products and initiatives the holding company conglomerate was pioneering. UTC had solutions like buses that ran on renewable-energy fuel cells and building systems that used low volumes of water and energy. While engineering-driven firms are frequently shy to brag, UTC decided investor awareness was lower than it should be.
In 2006, United Technologies launched an advertising campaign in major newspapers and business magazines to communicate its latest innovative products currently available, as well as those on the horizon. The advertisements showed detailed blueprint like representations of helicopters, outlining 40 percent lower maintenance costs and "more rescues per gallon" of fuel. One theme asked, "Can the right thing and the profitable thing be the same thing?" The answer, according to UTC, is "yes," positioning itself as the leader for these solutions and growing markets.
By also posting these advertisements where investment analysts traveled-the trains from Manhattan to the suburbs of New York, New Jersey, and Connecticut-they targeted the desired audience: institutional investors and Wall Street analysts. After the launch, UTC's reputation with financiers as a leader in innovation jumped by 10 percent, according to Lippincott Mercer. In general, increased investor awareness of strong fundamental performance and innovative business strategies should lead to higher demand for a stock, especially among long-term investors, which can result in higher price-to-earnings multiples.
Shareholder MeetingsShareholder meetings are a popular place to inform investors, especially since many consumer brand companies are owned by individual investors. At the Hewlett Packard (NYSE: HPQ) shareholder meetings, employees are fully engaged as most are co-owners of the company. Former Director of Environmental Sustainability Bonnie Nixon says that employee engagement on HIP issues is high at H-P, from ideas in daily work, the blogs employees write for internal and external audiences, and as long-time investors holding company stock. H-P is one of the top 10 HIP companies by quantifiable impact. "H-P has more than 40 Global Sustainability Chapters and the Live Green program seeks to help employees change their behaviors at home, at work and in the community."
HIP investors may find some discussion of these topics at shareholder meetings-for example, Intel's (NASDAQ: INTC) CEO highlighting socially responsible indexes, such as the Dow Jones Sustainability Index, where the firm has been listed. However, most companies-even if they are HIP leaders-are not communicating widely to investors about the profitable benefits resulting from their sustainability initiatives. As a shareholder, you can contact a company's Investor Relations department to recommend these topics be added to the next annual shareholder meeting. The more who do, the more the company will receive the signal that it's important to both act and communicate.

Shareholder Resolutions
One initiative investors sometimes pursue is the shareholder resolution. Like an election, it calls for a vote by shareholders of the company on a particular policy or practice. These initiatives are also called proxies. Capitalist investors have used them in corporate takeovers to force a sale. Do-good investors have used them to protest social or environmental policies, or lack thereof. Proxies tend to have a negative association, as they are often intended to force managers or boards to do something they have already decided against.
However, an interesting case of a shareholder proxy fight occurred at Federal Express (NYSE: FDX). Companies not pursuing eco-efficiencies typically have proxies filed by small groups of shareholders, a good example being Exxon-Mobil's (NYSE: XOM) ongoing battle with environmentalists. For FedEx, it was just the opposite. Stephen Malloy, of the Free Enterprise Action Fund, filed multiple proxies in consecutive years against FedEx, saying that it was "doing too much" by investing in renewable energy and hybrid electric vehicles, which Malloy felt did not increase shareholder value. FedEx's Board replied, says Jackson, that greenhouse gases were a proxy for fuel consumption, and the company needed to reduce fuel costs, hence supporting profits. The Malloy proxies collected less than 5 percent support and FedEx has continued initiatives that boost Earth metrics and profit at the same time. "It's a good illustration that environmental sustainability is good for your business," Jackson says.

In summary, very few companies have taken leadership in communicating with investors. Campbell's, FedEx, H-P, Intel and United Technologies are a select few who trust their investors enough to respect the core themes of sustainability, and how it can drive profit and shareholder value. A portfolio that weights these firms according to their sustainability results, like the HIP 100 and the NASDAQ CRD Global Sustainability 100, can deliver attractive financial performance relative to their benchmark.
In our next feature, we will focus on how to build an overall HIP Portfolio across all asset classes, including cash, fixed income, real estate, equities, commodities and currencies.