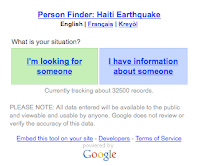 Google launched its Person Finder technology on Friday morning, in the aftermath of the Japan earthquake and tsunami.
Person Finder is an interactive database that allows users to search for missing persons online, or submit information about people who are injured or were missing.
The 8.9 magnitude Japan earthquake set off a massive tsunami, and the two have left behind floods, fires and the shutdown of public transportation systems and airports.

According to Times reporters in Tokyo and Beijing, up to 300 bodies have been found on a beach in Sendai, on the northeast coast of Japan, with another 110 confirmed dead in other parts of the country.
People looking for data on their loved ones, or government and aid agencies looking to coordinate efforts can all use Google's Person Finder to have one central database on people and their respective conditions in this crisis.
Google first launched Person Finder after the Haiti earthquake and most recently deployed the tool for the Christchurch earthquake, a 6.3 temblor that struck Christchurch, New Zealand, on Feb. 22.
Currently there are more than 7,200 records being tracked on Person Finder, which is available in both Japanese and English.