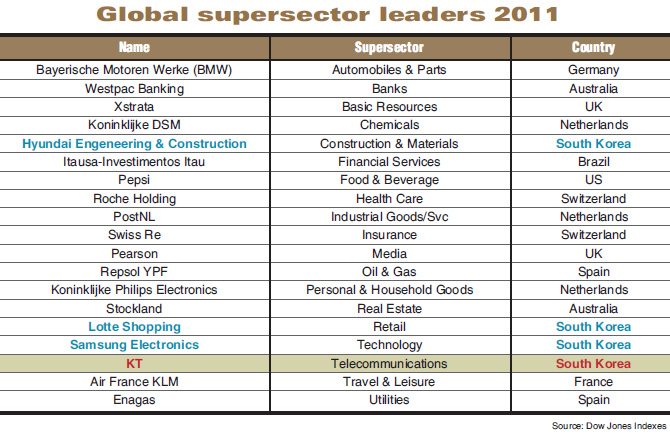 The indexes comprise of DJSI World, DJSI Asia Pacific and DJSI Korea. In DJSI World, the top 2,500 global companies in terms of market cap are evaluated in terms of sustainability. Among them, only 342 companies, or 13.7 percent, are included on the DJSI. There were 41 new entries and 23 from last year were dropped from this year’s list.
DJSI Asia Pacific evaluates the top 600 companies in Asia, and DJSI Korea tests 200 companies here. The Korea Productivity Center is in charge of evaluating Korean companies.
“The index suggests to businesses what they need and what should be done for sustainable growth and development. It is also the standard of corporate social responsibility for local companies wishing to compete at the same level as global players,” said Choi Dong-kyu, chairman and CEO of the Korea Productivity Center. Consumers who want products and services from sustainable businesses and investors wishing to invest in such firms can refer to the index.
“We select the best companies in each industry, evaluating them in economic, environmental and social perspectives. The evaluation period is from April to August every year,” said Kim Dong-soo, director of the sustainability management center at the Korea Productivity Center.
“They find business opportunities ahead of their competitors by fulfilling their corporate and social responsibilities. They also manage risks in economic, environmental and social spheres, marking stable growth and sustainable development.”
Kim explained that the evaluation is detailed, with around 200 factors examined in around 30 categories. The categories include governance structure, risk management, innovation, gas emissions, coping with climate change, nurturing of human resources and social contribution.
“Only the top 10 percent of each industry is included in the index. They have supreme competitiveness,” he added.
Korean companies selected on the DJSI World this year number 16, including KT. There were 60 U.S. companies, 50 U.K. firms, and 25 from Japan.
Being included on the DJSI World doesn’t necessarily mean the entity will be included on the DJSI Asia. KT is, however, included on both.
KT as global top IT company
Kim said that KT’s efforts over the past few years have made this outcome possible. “KT was evaluated highly in all factors. It was notable that KT excelled not only in economic activities, but also in environmental and social spheres. It scored especially high in service development, service influence, coping with the global climate change, human resources management, private information protection and risk management. KT has continued sustainable management practice for quite long time. Hence, its fundamentals have grown.”
Kim said the selection of KT as the supersector leader is especially meaningful because it is a communications business. “In Italy, for example, there may be and may not be a (good) semiconductor company. Communications companies, however, are in every country. There is no G20 country that doesn’t have a wired business and a wireless business,” he said.
“Being selected as the best among such companies shows KT’s competitiveness and potential in its advancement into overseas market later.”
KT competed fiercely with Telefonica, the global telecommunications company based in Spain, for the top spot.
Chairman Lee’s efforts pay off
Andy Gebhardt, CEO of Solability, a sustainable management consultancy, said KT Chairman Lee Seok-chae was behind KT’s achievement in sustainability.
KT has been innovating business processes to enhance effectiveness and make convenient working conditions for employees. Its business information system transformation project aims at optimizing IT systems. KT expects the project to add around 360 billion won in net value from 2012 to 2016. KT cut 381.8 billion won of costs in 2010 by enhancing productivity, making more effective investments and improving logistics.
KT also made innovations in services, cutting rates on data services by 88 percent in November 2009, as well as introducing the iPhone to Korea. KT led the country’s smartphone era, setting up 84,000 Wi-Fi zones. It has improved quality and speed of data transmission by applying its 3G technology.
KT has made efforts in social and environmental sectors as well. It plans to cut gas emissions by 20 percent from 2007 to 2013. It has set up solar power generators in its buildings and has expanded smart working to cut gas emissions cutting employees’ commutes.
While large conglomerates tend to grow at the expense of small suppliers, KT has focused on shared growth. It is giving some of its patents to suppliers for free.
click/
Good choice for investors
The indexes are also a good guide for investors, especially in times of economic turmoil. According to the Korea Productivity Center, the DJSI Korea companies have recorded 8.27 percent investment returns on average during the one-year period as of Aug. 31 this year. The gap is widening between sustainable companies and others in terms of financial performances, especially after the global financial crisis in 2008.
“While all businesses can go through crises, businesses with good, sustainable management have good fundamentals. They recover faster than others and mark sustainable growth,” the Korea Productivity Center said in a report. Leading firms in terms of sustainable management are outperforming competitors by 3.68 percent.
source: koreatimes.co.kr