War over water will produce no winners 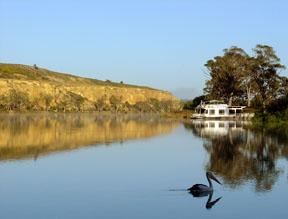 When Mark Twain decreed "whisky is for drinking, water is for fighting over", he might as well have been talking about the Murray-Darling river system.

He was supposedly referring to the 1850s California gold rush and the need for water to sustain burgeoning mining settlements. But in Australia, the famous author who during a visit in 1896 likened the Murray to the Mississippi where he grew up, was more prescient than he could have realised.

Advertisement: Story continues below For 114 years, since Twain's visit and the coincidental collapse of the Murray's first irrigation settlement scheme, at Mildura, vested interests have been doing just what he advocated: fighting over water, without resolution.

As the furore over the Murray-Darling Basin Authority's guidelines for a basin-wide water plan have highlighted, an agreement cannot be reached on how the water resources of the 1 million square- kilometre Murray-Darling river system, of which the Murray is the most important part, should be managed. Nor is accord likely to occur while the protagonists - irrigators, farm groups and river townspeople on one side and environmentalists, scientists and bureaucrats on the other - are ideologically so far apart.


The chasm was never more evident than during hostile town meetings held across the basin in October and November following the release of the authority's draft guidelines. The authority has now retreated to its Canberra bunker to decide whether to back off from its proposed hefty cuts to water entitlements, find a more acceptable alternative to irrigators or proceed full bore.

Because a minimum of 16 weeks was mandated in the 2007 Water Act for public consultation, the authority's Proposed Basin Plan - the precursor to an actual plan being implemented in late 2011 - cannot be released before January 21, 2011. Late February or early March seems the most likely timing for the next stage of the battle, which will be just as intense as the first skirmish if the authority sticks to its guns.

After all, this is no small war.

More than 2 million people live in the Murray-Darling Basin and its 60,000 farms produce 40 per cent of national rural production, worth more than $15 billion a year.

As basic as it might seem, there isn't even consensus between the two sides of the water debate about how the basin's rivers actually work.

During the brief European history of Australia, few - if any - of the myriad rivers that become the Darling in north-west NSW, and become the Murray in the south west, have been constantly flowing natural watercourses. On many occasions, for no other reason than lack of rain, all have dried up.

In the great droughts of the 19th and 20th centuries, especially the Federation Drought of 1895-1902 and another in 1914-15, even the Murray and the Darling were dry for long periods. Paddle steamers carrying wool from western stations were often stranded on the Darling riverbed for two or three years. Townspeople in Swan Hill and Mildura regularly held picnics in the middle of the bone-dry Murray.

At that time, when there was virtually no irrigation, it was at least accepted - as Dorothea Mackellar wrote so pointedly in 1903 - that Australia was a nation of ''droughts and flooding rains".

Despite this known variability of rainfall and, consequently, highly variable river flows, today there is widespread public belief that when Australia's rivers are reduced to their natural state of interconnected waterholes, which converge when there is sufficient run-off, they are "unhealthy".

Europeans' desire to manipulate the rivers and to blame people rather than nature when things go awry has been apparent since the late 1800s, after Mildura, Renmark and Wentworth were settled. In 1905, before becoming a federal MP, David (later Sir David) Gordon described the Murray as "the Nile of Australia" in a book he wrote for one of his pet causes, the Murray River League of South Australia. In it he urged greater use of the river and its tributaries, a call that was soon heeded.

Nothing could stop Australia's post-Federation inland development. In 1915, at the end of the short but severe 1914-15 drought and with memories of its catastrophic Federation-era predecessor still vivid, the River Murray Waters Agreement spawned the River Murray Commission which put in place the first water-sharing arrangements between NSW, Victoria and South Australia. This system still exists, albeit under different, and often confusing, water entitlement and allocation systems in each state.

Another key role of the River Murray Commission was to co-ordinate the construction of 26 weirs and locks - only half of which (10 in South Australia) eventuated - to facilitate navigation on the Murray, as well as nine others (five of which were built) on the Murrumbidgee and Darling. Soon after, in 1919, work began on Hume Weir near Albury as a flood mitigation and irrigation project. The project took 17 years to complete.

These initial infrastructure programs set in train rapid development of the southern inland that supports 300,000 people living on or near the Murray and Murrumbidgee rivers alone.

But, symbolically, they also represented an admission that human intervention was needed to "control" water flow in these rivers.

The view has prevailed ever since, even though ultimate power over the nation's rivers by humans has never been, and will never be, achieved.

Massive rainfall variability in the 19th and 20th centuries remains a fact of life in the Murray-Darling Basin. At its lowest point, as evident in the first decade of the 21st century, it means there is insufficient water to meet the needs of all stakeholders - town dwellers, farmers, businesses and the environment.

But in occasional wet years such as this, there is plenty of water to go around. Right now, dams in the 15 big catchments of the Murray-Darling Basin hold 16,650 gigalitres or 73 per cent of their combined 22,590-gigalitre capacity. This water in the bank is 50 per cent more than current total annual irrigation entitlements (licences) of 11,570 gigalitres in the basin and more than double the reduced water extraction cap of 7000-8000 gigalitres proposed by the Murray-Darling Basin Authority.

Eight years ago, as the worst drought in a century began to bite, it was a far different picture. As one year of drought rolled into another and dam levels fell alarmingly, the Howard government was spurred into action.

Its 2002 Living Murray program, billed as "Australia's most significant river restoration program", sought to return 500 gigalitres to six environmentally iconic sites between 2004 and 2009.

Compare this minuscule amount with the 3000 to 4000 gigalitres of recommended water savings in the authority's guidelines, or the 7000 gigalitres scientists believe should be returned to the river system, and it seems tokenistic. So, too, does the 2004 National Water Initiative, one of the lofty aims of which was to "complete the return of all currently over-allocated or overused systems to environmentally sustainable levels of extraction". Clearly, as demonstrated in the authority's guidelines and recommendations in June by the Wentworth Group of scientists for even greater water cutbacks, this initiative also didn't achieve one of its main goals.

It led to the Howard government's last-ditch attempt, in early 2007, to be seen as environmentally responsible in the wake of its opposition to a carbon tax. After the Commonwealth failed to persuade all the states (especially Victoria) to hand over their water rights, the centrepiece of its National Plan for Water Security became a $10 billion program to buy water from irrigators and to improve water storage and delivery infrastructure.

It brought into law the Commonwealth Water Act, which established the Murray-Darling Basin Authority, giving it powers to manage water resources in ''an integrated and sustainable way" and requiring development of a basin water plan that determined the volume of water needed "to maintain and restore environmental assets".

The act, which took effect in early 2008, gave power to the water minister - then Penny Wong, now Tony Burke - to implement the plan, without further legislation.

Despite recent claims to the contrary, the authority had, at best, a vague responsibility to consider the economic and social impacts of its recommendations. Its priorities, put in place by Malcolm Turnbull as water minister, were environmental.

So it was little wonder that when, in early October, the authority suggested 27 to 37 per cent cuts in irrigation water entitlements - all for the environment - there was such a savage response. Previous cuts in groundwater use and surface irrigation in the past several years had already bitten hard.

This seems to prove that the current, much-maligned allocation system - whereby state water authorities decide how much of a licensee's entitlement can be used - is an effective self-correcting mechanism. This, however, is not the public perception, nor does it hold water with the authority, environmentalists, scientists and the former water minister, Wong, all of whom have been determined to slash irrigation entitlements.

Enter the new Water Minister, Tony Burke. "If anyone can save the situation, it will be Burke," the chairman of Northern Victorian Irrigators, Dudley Bryant, said after a meeting with the minister.

"He seems to want to find an equitable solution and gave us a good hearing, but of course he's a politician so we'll have to wait and see," he added warily. Burke has a different approach than Wong, whose assertion that "everyone will feel some pain'' rankled irrigators, who believed she had a personal agenda and was pre-empting the authority's recommendations.

Having heard the message from irrigators, Burke has been more conciliatory. His rebuke of the authority for not adequately considering the social and economic impact in its report was the right signal at the right time. Now he faces the ultimate test: finding a solution that takes the heat out of the battle and at least partly satisfies both sides.

But for now, Australia's water wars are far from over.